The suspected gang member who was being chased is still at large.
KFSN
By Gilbert Magallon 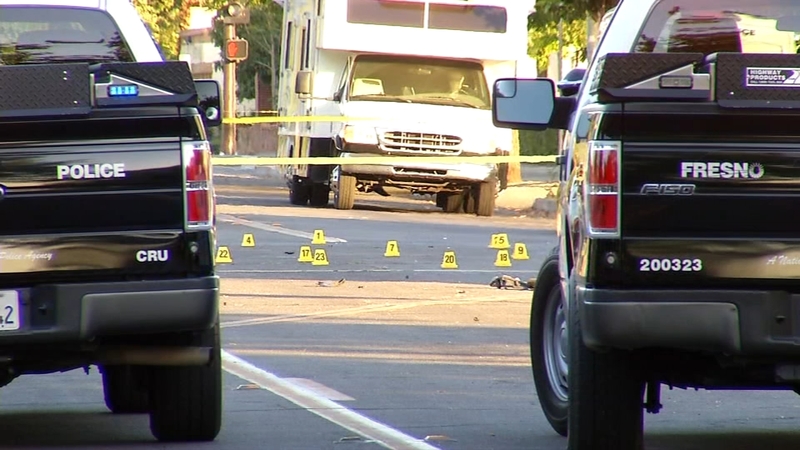 FRESNO, Calif. (KFSN) -- UPDATE: Fresno police have identified the 19-year-old woman killed after a police chase led to a crash in downtown Fresno.

Authorities say Hannah Pimentel of Clovis was killed in the crash.

The suspected gang member who was being chased is still at large.

UPDATE: The victim in this crash was Hannah Pimentel, a 19-year-old from Clovis.

This is a breaking news update. Our orignial story follows below.

A woman has been killed after a police chase led to a crash in downtown Fresno on Wednesday afternoon. The suspected gang member who was being chased is still at large.

There, officers with the Multi-Agency Gang Enforcement Consortium known as MAGEC, were tracking down a gang member wanted for several weapons violations.

A CHP officer with MAGEC pulled over a black Ford Focus believing their suspect was inside.

"The trooper got out of his vehicle and then the driver quickly took off at a high rate of speed," says Balderrama.

As authorities chased after the black Ford, the driver tossed out a loaded AR-15 rifle.

At one point officers lost the vehicle.

"That unit attempted to catch up to the vehicle at which point he saw a cloud of smoke where a collision took place," says Balderrama.

The suspected gang member went against traffic on Stanislaus Street, slamming into a BMW and killing the woman driving.

Officers say the suspect, who was injured in the crash, jumped out of his car and ran away.

The collision also damaged a building that was in the process of becoming a sports facility for underserved youth.

Shaq Moseley with non-profit TP Guru N0z0n3 has been working on opening the Laboratory Training Facility for several months.

"Having something like this is just a major setback, especially since it is a grassroots project," says Moseley.

Moseley says as devastating as the damages are, his heart goes out to the victim's family.

CHP officers are now handling the pursuit investigation while police investigate the crash.

Investigators say they know who the suspect is and are actively pursuing him.