Woman and man killed in shooting outside of Southwest Fresno church 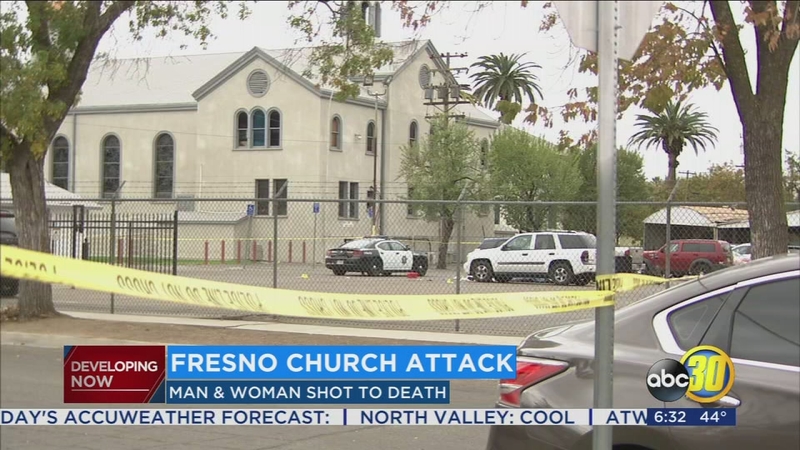 Woman and man killed in shooting outside of Southwest Fresno church

FRESNO, Calif. (KFSN) -- As people attending St Alphonsus church followed the priest outside of the building after a 7:30 mass Sunday morning, they heard gunshots coming from the back side of their church.

People in the neighborhood say they did not know where the gunshots were coming from. Priest Dominic Rajappa says after he heard the gunshots he went around the other side of the church to see what happened.

"So when we went there and other people went there I saw the lady dead in the car so she was shot dead, and the other man was on the floor there, a lot of blood," said Priest Rajappa.

It was in that parking lot where 64-year-old Manuel Garcia opened fire on his estranged wife 61-year-old Martha Garcia and her boyfriend.

Garcia was killed by the gunshot, and her boyfriend was severely injured by the time people ran over to provide first aid--the priest says a retired nurse tried helping him before first responders arrived. The boyfriend later died from his wounds.

Police officers believe Manuel Garcia could have been waiting in the parking lot.

Police Chief Jerry Dyer said, "We're not certain as to how the shooting occurred. Based on the evidence at this point, it appears they (the victims) did not know he was there."

Priest Rajappa says he did not recognize the victims, and that church members say they were not regulars there. In his eight years of being a priest at Saint Alphonsus church, he says he has never seen anything like this.

The priest says no masses were canceled today, this entrance was not blocked off and people were still able to attend church, where they said prayers for the victims today.

Family members came together in grief outside the police lines. As a swat team moved in to find their dad, they grieved both the murder suspect and their mother, the murder victim. And one daughter was the first to know.

"She had received a text message, a series of text messages from her father. Her father told her he had just shot and killed her mother in the church parking lot and that he was heading back to the house," said Dyer.

Martha Garcia had four kids with her husband, Manuel. They still lived together in a Southwest Fresno home, and police say they had no history of domestic violence reports. But Martha told friends and family she was getting a divorce and she had a new boyfriend.

"And it is that boyfriend that she was with this morning at St. Alphonsus church when her husband came and shot both is them," said Dyer.

After 43 years of marriage, police say the Garcias now lived separate lives in separate rooms. But Manuel made sure they died on the same day.

Police say he shot and killed her outside the church near their home, let his family know what he did, and even as he ignored commands from police, he texted his daughter again -- telling her where to find some of the possessions he was leaving behind.

Minutes later, with police ready to arrest him, officers heard a single gunshot.

Inside the home, they found Manuel Garcia slumped over on a couch, still clutching the .45 caliber handgun he appears to have used to shoot his wife, her boyfriend and himself.