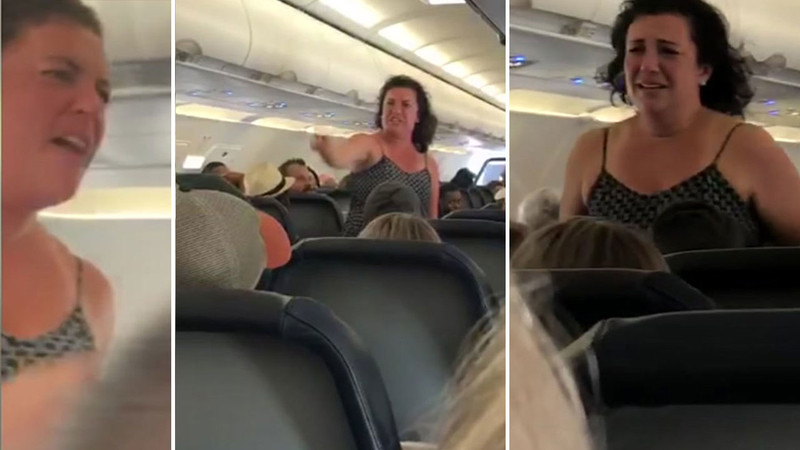 HOUSTON, Texas -- Passengers on a Spirit Airlines flight are describing what they saw when a woman had a mid-flight meltdown on the way from Houston to Minneapolis.

A passenger told ABC13 people were pretty upset after a woman's outburst on a Spirit Airlines flight.

This happened after the flight made an emergency landing in Rochester, Minnesota, for a different passenger who needed medical attention.

The woman who appeared to have a breakdown demanded to get off the flight, walking up and down the aisle three separate times, passengers say.

During the intense one-minute, 20-second video, the woman curses, makes threats involving her brothers, and acts erratically before a plane full of stunned passengers.

Passenger Frances Andraya tells ABC13 the woman wanted to help with the medical emergency, saying she was a nurse. However, the crew told her they already had three people helping plus first responders and asked her to stay seated.

At one point, when a male passenger stands up to block the woman from getting to the front of the plane, she shakes her fist at the man before lashing out again.

"Do you know who my brothers are? They are f***ing Marine snipers. Do you want to f*** with a f***ing Marine?" she screams, before pushing her way toward the cockpit.

Before the woman was escorted off the plane, a stranger tried to console her, even letting her cry on his lap in an effort to let the woman regain her composure.

Passengers say the woman claimed to be a military veteran and passengers think she was suffering from Post Traumatic Stress Disorder.

"We realized that it was like a PTSD episode because of all the things she was saying. 'You got to get me off this plane, I am ex-military, you got to contact my family', so after a while it was like she is not just being a rude passenger, she has some sort of imbalance or stress disorder," Andraya explained.

Spirit Airlines released the following statement to ABC13 about the incident:

Yesterday morning, a flight from Houston to Minneapolis had to land in Rochester, Minnesota due to a guest experiencing a medical emergency. On the ground in Rochester, another passenger became erratic and irate and was removed from the aircraft with the assistance of law enforcement. We apologize to our guests who had to witness this and for the inconvenience of the delay. Safety is our top priority at Spirit Airlines.