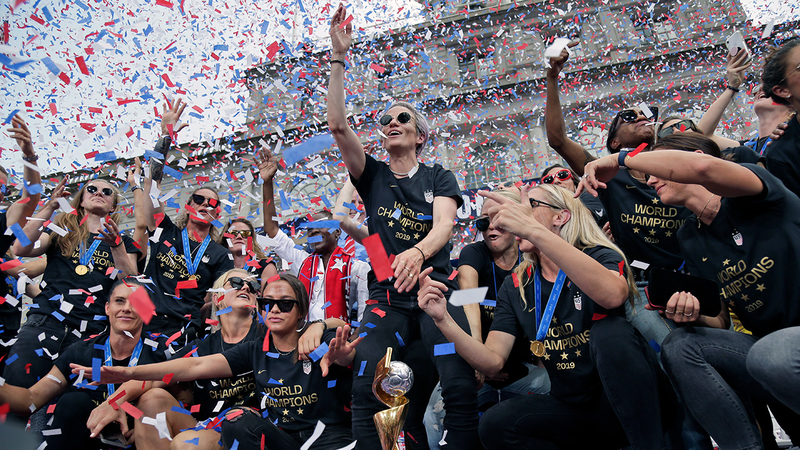 It is the city's first such parade since the team's Women's World Cup win in 2015, and the city said 300,000 adoring and cheering fans lined the streets.

Crowds chanted "USA!" as the floats rolled by, as colorful confetti drifted down from office buildings. More than 2,000 pounds of shredded recycled paper was prepped for the event.

The parade route took the team up the famed Canyon of Heroes, down the section of Broadway between the Battery and City Hall in Manhattan.

The celebration continued with the ceremony at City Hall, during which Mayor Bill de Blasio -- who was also riding one of the floats with USWNT members -- gave the players symbolic keys to the city.

"Do what you have to do. Step outside yourself. Be more. Be better. Be bigger than you've ever been before," Rapinoe said. "If this team is any representation of what you can be when you do that, please take this as an example."

Aly Hoover, 12, of Glen Ridge, New Jersey, stood at the sidelines with a poster of Morgan's face.

Garret Prather brought his newborn son "to celebrate how the American women made us proud on and off the field."

Fifteen-year-old Lily Buccholz, of Sumner, Iowa, stood by the parade route Wednesday with her family while dressed in red, white and blue.

The U.S. won its record fourth Women's World Cup title and second in a row by beating the Netherlands 2-0 Sunday.

Rapinoe converted a penalty kick in the 61st minute after a video review determined Stefanie van der Gragt had fouled Alex Morgan with a kick to the shoulder in the penalty area, and Rose Lavelle added a goal.

Mayor de Blasio needed just a few seconds after the final whistle to invite the team to the ticker-tape parade.

"You have inspired the entire country - and New York City knows how to celebrate champions." the mayor tweeted.