Bus service from Fresno to High Sierra begins in summer 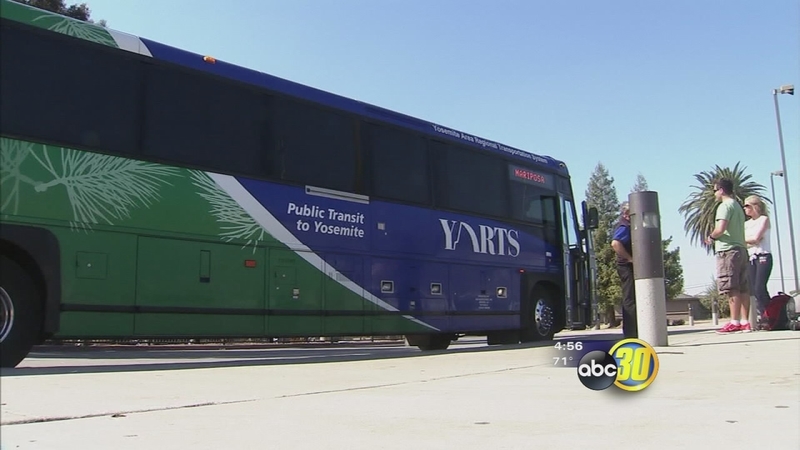 Bus service from Fresno to High Sierra begins in summer

FRESNO, Calif. (KFSN) -- Getting from the Valley to the High Sierra is going to be easier. Bus service from Fresno to Yosemite, Kings Canyon and Sequoia National Parks is set to begin this summer.

Yosemite Area Transportation System or YARTS buses have been carrying passengers to and from Yosemite National Park and Merced for 15 years. The service is now expanding to include Fresno

"It's probably going to be very, very successful. It's long overdue that it should happen," said YARTS Transit Manager Dick Whittington.

Beginning on Memorial Day, buses will take passengers from various stops in Fresno -- like the airport, Amtrak station and Fresno State -- to Coarsegold, Oakhurst and into the park. The fare all the way into Yosemite and back is $30. It will be cheaper if you aren't going all the way.

"So if you are going from Fresno to Oakhurst for example the cost would be about half of what it is to go on to Yosemite Valley for example," said Whittington.

The boost in regional transportation is also going south into Kings Canyon and Sequoia National Park.

"We believe this is another upscaling of our transportation system, adding to it and giving our community, I think, global reach," said Laural Fawcett, regional planner for the Fresno Council of Governments.

The Fresno County Rural Transit Agency will start running buses from Fresno and other communities to Sequoia and Kings Canyon National Parks on Memorial Day through Labor Day. It's similar to the service offered by the Sequoia Shuttle in Tulare County.

"Once it gets off the ground, we think its gonna take off because there is a strong visitor attendance for the parks and also a strong hiking community as well, and it can afford individuals one-day trips at a very modest reasonable cost, which is $15 roundtrip for this service," said Moses Stites, general manager of the Fresno County Rural Transit Agency.

Both services to Yosemite and Sequoia Kings Canyon are expected to be big hits with tourists and foreign visitors. And the cost of a bus ticket includes your park entrance fee. The goal is not just convenience but reducing air pollution and the number of cars crowding the parks.