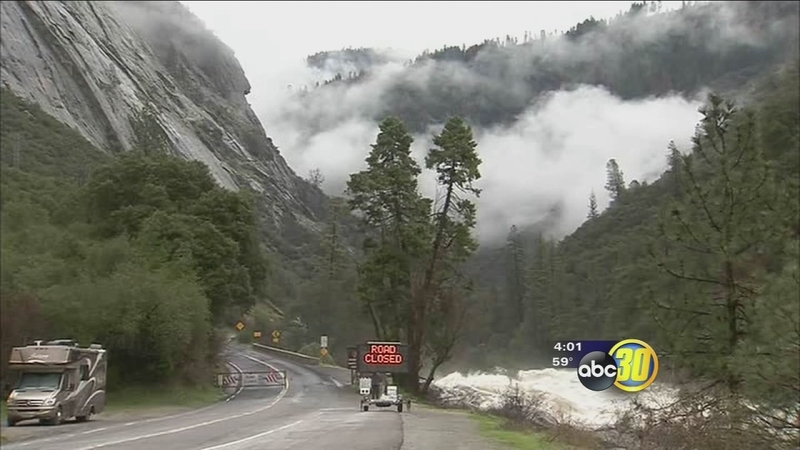 YOSEMITE NATIONAL PARK (KFSN) -- Yosemite National Park visitors are asked to be aware of hazards, including potential wet and icy road conditions, mudslides and debris on the roads.

The Merced River has reached its limit and is overflowing into the valley. Monday morning, the river was above 12 feet and overflowing at the Pohono Bridge.

The park service says although there was no major flooding in Yosemite Valley, both roads and water systems were impacted. All roads, leading into the valley remain closed and a rockslide was reported along Highway 140.

Roaring rivers and newly formed waterfalls are greeting visitors as they drive through Yosemite National Park. However, for those visitors traveling down El Portal Road, their journey ends at the iron gates and "Road Closed" signs.

Half a mile down the way, crews cleared boulders after a massive rock fall early Monday morning and caused park officials to close the park entrance gates along Highway 140.

Meanwhile, inside the park, loud, thundering waterfalls and raging runoff are what Yosemite tourists and even employees missed out. A few essential workers was all it took to handle the extent of damage to the Yosemite Transportation Garage.

Stormwater swept through areas of Yosemite Valley and left mostly only mud behind. Sandbags were the best help in keeping runoff from seeping underneath doors and getting into buildings.

Adam Kinnard says he just moved into his home in Foresta just a week before he was asked to evacuate.

"I had to sort of move everything in my house from the ground level up to the attic in case the house did flood," he said.

After several days of staying with friends, he hoped to be able to get home on Monday but that plan hit a roadblock.

"After a while, it is hard," Kinnard said. "I have a small bag that I packed. I didn't think I'd be out this long."

Stormwater swept through areas of Yosemite Valley and left mostly only mud behind.

Nearby businesses are also feeling the effect, NatureBridge is partnered with the park service and brings students into the park for a few days of learning. They planned on having five schools go into the park on Monday but plans changed.

"We were very hopeful that with flood levels receding," NatureBridge Yosemite director Kristina Rylands explained. "We'd be able to get our staff up into Yosemite Valley, and so, the rock fall is one more thing impeding our ability to resume our operations as normal."

John Patton says he works on the valley floor and hasn't been able to get in since last week.

"The rock fall that we saw today is huge rocks, bigger than we were expecting," he said. "Hopefully, that gets cleared soon. If not, it looks like we'll be down in El Portal a little bit longer."

The storm, though powerful, did not leave a lasting impact. In fact, the electricity never went out, and the sewage system never stopped working.

"For the most part systems we're intact," Scott Gediman with the park service said. "And it's because we were able to keep things going and we didn't see the huge water that we're able to welcome visitors back tomorrow morning. "So, it's a really great thing."

Culverts made streams alongside the road. In a few areas, the highway was more like a waterfall as swift water raced into the Merced River.

At Swinging Bridge, the downpour seemed most notable as water made it all the way up to the deck where there's normally a 10 to 12-foot drop below. Officials say cresting water did not cover any bridges in the park.

"We've had a lot of rain, and it's been great," Gediman said. "It's a warm storm. I mean, it's something, the animals have been out and nobody got hurt."

While Yosemite Valley is expected to reopen on Tuesday, the road to get there is closed indefinitely. People who need to get inside say all they can do is wait.

"I'd really like to get back up to my house," Kinnard said. "But it's also par for the course out here."