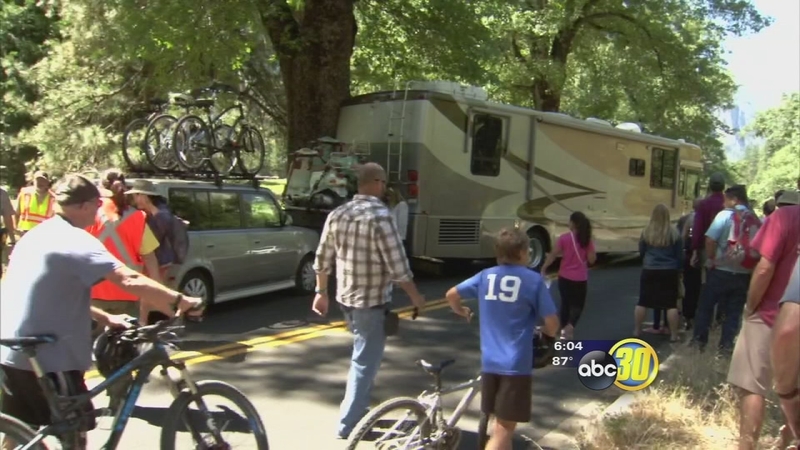 YOSEMITE NATIONAL PARK, Calif. (KFSN) -- It was a calm scene near the President's podium, but on the rest of the valley floor was a different story.

Roads in the park, at the entrances and the exits, were shut down for hours. Tourists stopped in their tracks in awe of the President and in shock of the gridlock.

Andy Kubala and Debbie Anderson are visiting from Florida, they were stuck in the gridlock on Saturday.

"We have not been able to move any place in the park," said Kubala.

For hours before, during, and after Mr. Obama's speech nearly all traffic in Yosemite National Park was at a standstill.

"It's really unfortunate that four people jam up at least 100,000 people," said Kubala.

As rangers pushed people back to make way for his arrival, roadblocks took on a whole new meaning.

"The RV over here, They decided that needed to move. They tried to take a turn and now they're stuck on a tree and it's blocking the only view of the president right now. We had no idea about the fiasco that was going to happen today," said Neil Karsten, Ripon.

Even hiking trails were Restricted. The lower part of the Yosemite Falls was closed off to the public. Roads became parking lots and parking lots the new local hangout spot.

"Wish we could get a move on, but you're in Yosemite. How much can you really complain," said Shay McConnell, Orange County.

And when it came time for the speech a grainy looking dot was as close as many could get-- but for some that's close enough.

The Obamas are still in Yosemite through Father's Day.