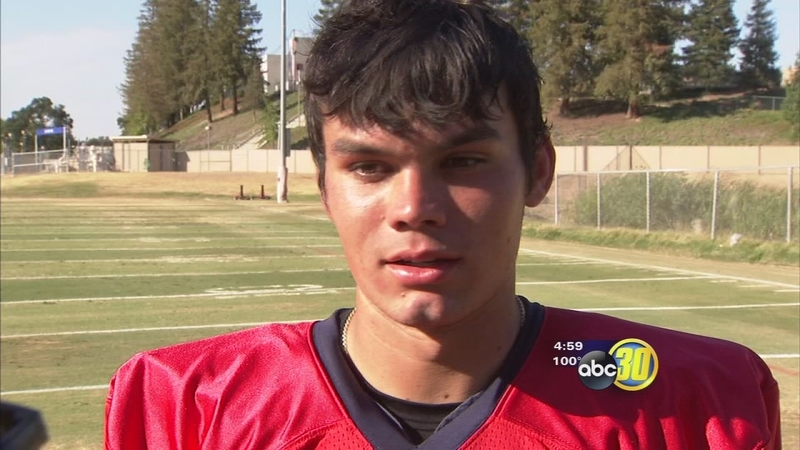 FRESNO, Calif. (KFSN) -- A quarterback and linebacker on the Fresno State football team, and a forward on the women's soccer team were arrested at a party on Saturday night.

According to police, the event, at a home at Indianapolis and Bond in Northeast Fresno got out of control.

Officers arrived and spotted 20-year-old Zack Greenlee drinking what appeared to be a cup of alcohol outside the house. According to Fresno Police Chief Jerry Dyer, Greenlee resisted a police officer attempting to take the cup away.

"But there was some type of a brief altercation," said Chief Dyer. "Ultimately the individual was arrested for public intoxication and for consuming alcohol in public."

"Who was felt to be under the influence of alcohol, was also verbally resistant to the officers and refused to leave the location." Chief Dyer said.

Johansson is 23. A forward on the women's soccer team.

The third student athlete was identified as football linebacker Brandon Hughes, who is 21. Dyer says Hughes was insistent on talking to Greenlee, who had been placed in a patrol car. While he hadn't been drinking police say he ignored their orders to stay away from the car.

Chief Dyer said, "During that arrest they took him to the ground there was some resistance he ultimately was handcuffed and those three individuals were taken to jail."

The chief says this was not unlike what officers typically encounter at a party.

Chief Dyer added, "This is not any type of assault on a police officer it's not any overly aggressive behavior, it was simply some poor decisions that were made involving alcohol as well."

University officials have not decided on how the arrests will affect the athletes or their teams.