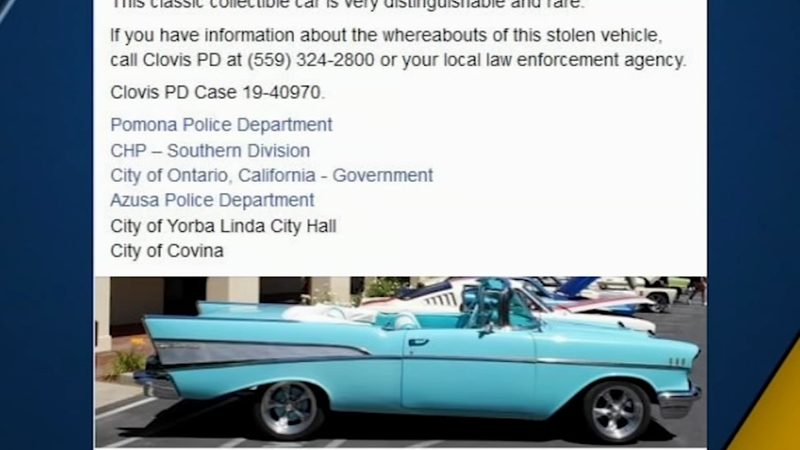 CLOVIS, Calif. (KFSN) -- Police solved a classic car theft from Clovis as part of a major police bust Wednesday in the Fresno area.

The wake-up call from Fresno police came loud and clear in a southeast Fresno neighborhood.

Investigators marched up and served 15 search warrants, looking for evidence from a series of burglaries dating back to the beginning of the year.

Surveillance footage from one of the targeted homes shows three suspects and an extended cab pickup truck.

Clovis police got similar evidence last month from the scene where thieves stole this classic car worth about $150,000.

"Obviously, we found some video in the neighborhood where this event occurred and then the detectives that worked the case spent countless hours following up the different leads that they had on it," said Sgt. Jim Koch, of the Clovis Police Department.

Investigators found surveillance footage from Visalia showing Jermaine Fuller in the '57 Bel Air a couple hours after it disappeared from Clovis.

But the last time the classic car was seen was later that day in Pomona and the owner tells Action News he thinks it might be gone for good.

Jermaine Fuller has a prior chop shop conviction from 2016 after Fresno County sheriff's deputies found him alongside another classic car, a 1968 Mercury Cougar.

Police say their work isn't done and they're looking into the connections between the missing car and the burglaries.

"There's still an ongoing open investigation," Sgt. Koch said. "There are several different locations being search and there are a number of pieces of property that have been recovered."

Fresno police have conducted surveillance on Jermaine Fuller, but their work is not complete.