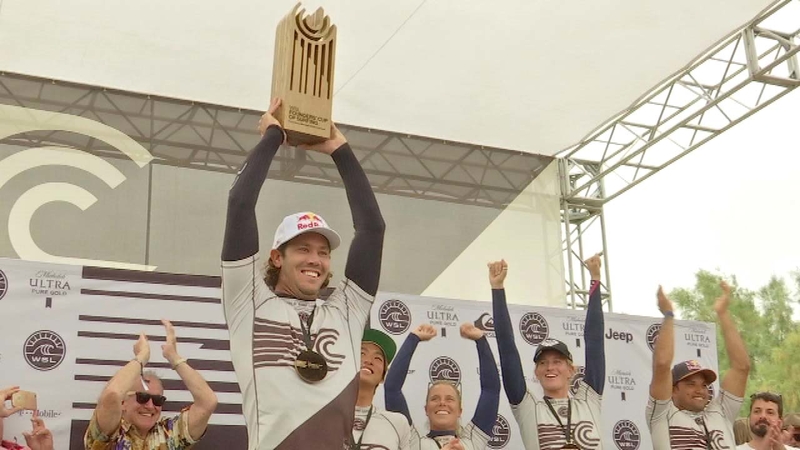 FRESNO, Calif. (KFSN) -- It was an action-packed day of surfing that once again came down to the final run from Kelly Slater. The difference this time? The waves were 100 miles from the nearest beach.

Jordy Smith all smiles after leading team world to a win in the inaugural #FoundersCup @ABC30 pic.twitter.com/RCGPPJthZX

The World Surf League's Surf Ranch in Lemoore hosted the inaugural Founder's Cup bringing with it the best 30 surfers in the world. It was a historic weekend for the select group that competed on an artificial wave in the debut of 'arena surfing."

"What he's been doing behind the scenes to help the WSL put this amazing technology together is just mind-blowing so on behalf of everyone, Kelly a massive thank you for everything you do," said WSL president Sophie Goldschmidt.

Felipe Toledo wipes out for Brazil. Team World in front but Kelly Slater the last to Surf. Team USA the chance to steal it #founderscup pic.twitter.com/LHnXThpGA9

Slater was the catalyst behind building the wave pool and he very nearly won the event on his final run. The judges gave him a 9.0 and a 9.2 would have forced a surf-off between Team USA and Team World. "I think as the judges kind of saw more waves we thought that the scores would get pulled back a little bit so if we stuck it in the first round, which all of our guys and girls did, then we would be in a great shot to get to finals day," said World Team Captain Jordy Smith.

The team event was seen as a preview for the Olympic surfing that will be held in 2020.

Pretty awesome move from Jordy Smith in the final round of the #founderscup. @ABC30 pic.twitter.com/TpWudcxNV9