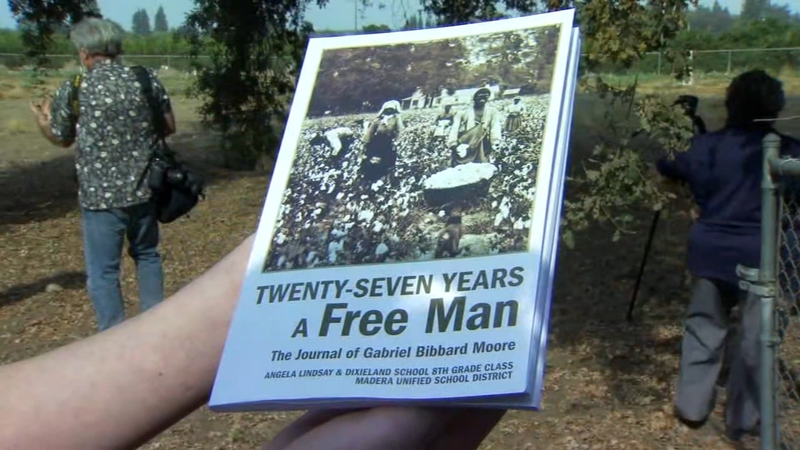 "Twenty-Seven Years a Free Man" details Moore's life as a successful farmer and the struggles he faced as a free black man in the Central Valley.

He escaped slavery in the 1850s, but couldn't escape racism.

"They were inside getting a drink, and I couldn't go inside because they won't let blacks drink there," said contributing author Melanie Mendez as she read an excerpt from the book.

The book was unveiled at the Akers Cemetery, where Moore was laid to rest.

This is the first time the former Dixieland School 8th graders get to see all their hard work realized.

"Now I get to say this is the first book I have written," said contributing author Sean Fitzgerald.

But students overcame the struggles that came with distanced learning to honor Moore's legacy.

"These students stepped up. This was an optional project it was not for a grade," she said.

Moore's story has been eye-opening for students. Every detail comes from his treasured diary.

In total, the book has 67 entries, including Moore being denied the right to vote and his reaction to Abraham Lincoln's death.

"Right now here in Fresno, most people are happy that John Wilkes Booth killed President Abraham Lincoln because the people of Fresno didn't like the fact that Lincoln wanted to free the slaves," said Fitzgerald as he read an excerpt from the book.

Moore died in 1880 at the age of 65. He drowned trying to get cattle across the Kings River.

A few years at the turn of the century, his grave was desecrated, the headstone smashed, likely by vandals angry over Moore's status as a free man.

But Angela and her students would write a final chapter on his life without words.