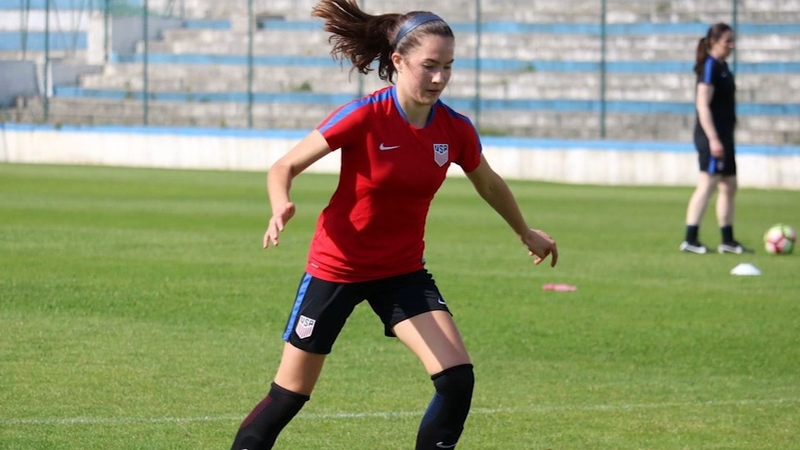 But on top of a demanding soccer schedule she will be graduating with a 3.9 grade point average.

She doesn't just compete for the national team, she also plays club and helped lead Edison to back-to-back Valley Championships.

And she was offered a scholarship to Cal prior to her sophomore season.

"She's helped us reach heights that we've never reached before. She's helped the program reach a new standard and we just hope we can keep it there in the years after she's gone," says larry Hinz, girls' soccer head coach.

The U.S. developmental academy discourages players from competing for their high school teams, but Abby says that's where she had the most fun.

"It's a chance for me to represent my school and community in a way that I wouldn't otherwise be able to. I always have the most fun playing high school soccer, there's no experience like having a full stadium with being cheering you on," says Abby.

Danny Alberty, Edison's Head Track and Field coach, has been trying to get Abby to run for the team since her freshman year. It wasn't possible with her busy soccer schedule, but she was finally able to join her senior year.

"Abby decided to come out this year, I was so excited that I told the Athletic Director and principal," says Alberty.

Abby didn't get a chance to compete for the Tigers this season due to the cancellation of spring sports. But Coach Albert says he knows she would've shocked the Valley.

"Been coaching here for 36 years, and I've seen many many athletes. With Abby I'm proud that I has some sort of impact on her life, that I can look back on TV one day and say I used to coach her in high school," says Alberty.

Borchers' schoolwork has never suffered despite missing school all the time. She drives to San Jose two times a week for practice and has competed in multiple international tournaments for the U.S.

"I do homework, projects in the car. We have hotspots when we lose wifi in the hills," she says.

The center forward has taken the path to become a professional soccer player but after being in the competitive environment the past four years she's had a change of heart.

"I realized through the national team and program that I didn't want to do that, I think it's surprising for people to hear that. You grow up watching all these legends, I got to do that and discovered it wasn't for me," says Abby.

The Tiger wants to go to grad school for journalism and become a writer.

"I'm super interested in advocating for women's sports and their rights. If I was going to represent my country in any way it would probably be through my writing," she says.