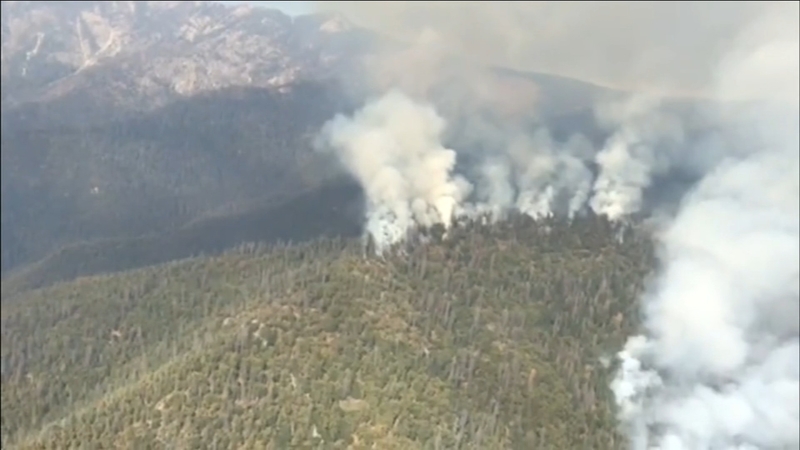 The Alder, Mountaineer, and Moses fires are burning simultaneously in the Sequoia National Forest.

All were caused by lightning.

The Alder Fire was discovered first, on October 4th, and is by far the largest of the three.

Because they're burning in remote areas with a large number of dead trees, posing a danger to firefighters, crews are using what they call a confine and contain suppression strategy for these fires.

It's an indirect approach where they identify natural barriers, such as creek beds and river corridors that can hold the fire within a specific boundary.

"We'll continue to monitor by aircraft and make sure that everything stays within that perimeter," said U.S. Forest Service Fire Management Officer Ernesto Villa. "We generally are doing a recon flight daily to make that those areas are staying within that."

Monday, the San Joaquin Valley Air Pollution Control District issued a health caution for mountain and foothill communities impacted by smoke from the fires, advising anyone exposed to poor air quality to stay inside with the windows closed.

"People that have respiratory issues, even heart conditions, they're going to want to follow the advice of their health care provider and limit their exposure as well," said Cassandra Melching, Outreach and Communications Representative with the San Joaquin Valley Air Pollution Control District.

Melching says the smoke from the fires hasn't spread to the Valley floor, and she doesn't expect it to.

Some of the communities closest to the fires are ones that were threatened by last year's Pier Fire: Camp Nelson, Sequoia Crest, and Doyle Springs.

Crews are back in those areas now, removing dead trees and working on contingency lines.

Villa says he expects staffing levels to decrease in the coming days-there are currently more than 300 people assigned to the Alder Fire.

"We'll still keep people on it to make sure that it stays until we do get some kind of moisture that comes in the area to be able to say that we can walk away from it," he said.