Here's how almonds get harvested in the Central Valley 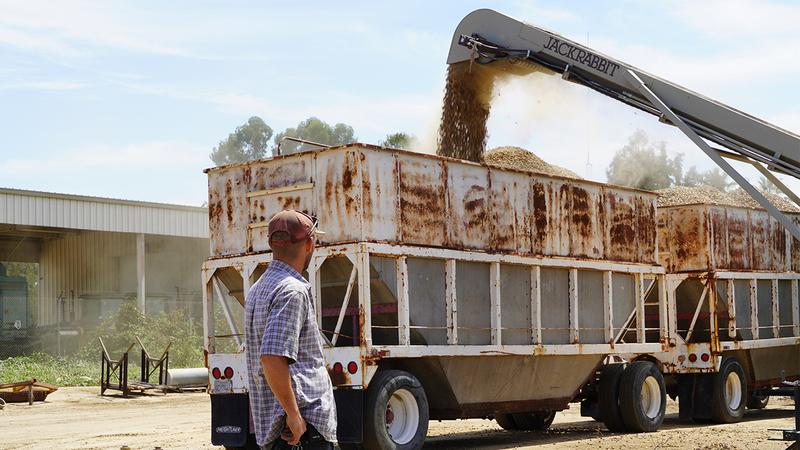 Here's how almonds get harvested in the Central Valley

FRESNO, Calif. (KFSN) -- Almonds are the top crop in Fresno County and the second-largest in the state, but unless you grew up near orchards, you may not know how they're harvested.

"They're okay to drop and they can take a little more of a beating," said Emin Dhaliwal. His company, Pacific Distributing Inc., sells the tree shakers used to literally shake the almonds free from their branches.

The practice is fun to watch if you've never seen it: a mechanical arm grabs the trunk of the tree, then vigorously shakes until the ground around it is covered with almonds, still safe in their hulls. Each tree takes a matter of seconds and the settings can be adjusted to be softer on younger trees.

"I've heard they used to take tarps out and beat them with mallets," Dhaliwal said when asked how almonds were farmed before shakers came around. The same practice is also used for some other nuts, including walnuts.

Dhaliwal estimated that one drive in a tree shaker can shakedown 20-30 acres in a day, and he estimates they've sold about 100 machines in the Central Valley just this year. The high-efficiency is needed when you consider that California supplies 80% of the world's almonds.

The crop has become a solid alternative for Valley farmers who were struggling with other crops in years past. Jacobsen also said he estimates there are about 100,000 jobs directly or indirectly tied to the California almond industry.

As far as the harvest goes, it's a process explained by Michael Favagrossa of Favagrossa Farms.

"This time of year is the only time a lot of farmers get paid," Favagrossa said regarding the importance of harvest season. "They go all year long hoping and praying that they're gonna make a crop, and this is the time of year they see am I gonna be okay until next year."

Favagrossa said he thinks the majority of almond farmers are going to be happy with this year's yield, despite a wet spring that had some worried. He says either way, it should be an improvement on the year before.