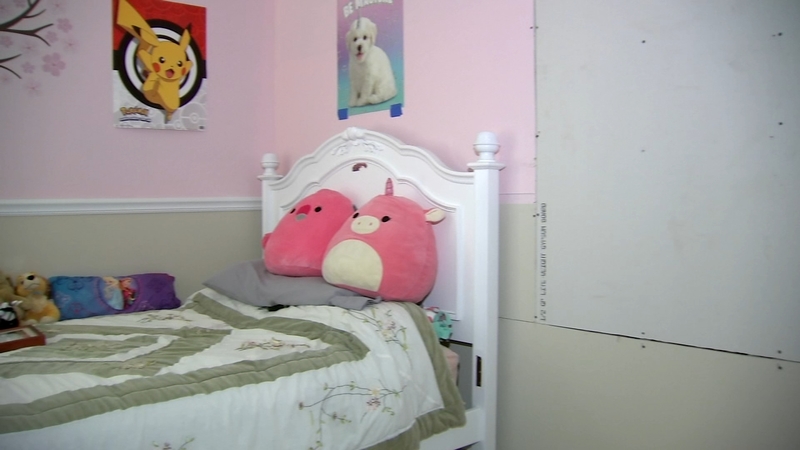 LOCKPORT, Ill. -- A family in Lockport, Illinois said strange sounds, including music and talk radio, has been coming out of their walls and keeping them up at night off and on for about six years.

"There are voices in the wall and I don't know what it is," said 9-year-old Brianna Smith.

It may sound like an episode of the popular Netflix show "Stranger Things," but the mysterious sounds Brianna is hearing are real.

"It has been waking me up at night," she said.

The sounds are coming from the bedroom walls of her home in the middle of the night.

"It kind of keeps us up at night," explained Brianna's father Richard.

Richard said the family doesn't have any speakers in their walls. He captured some of the late night noise on his phone and sent it to the WLS I-Team. The music was faint, but the I-Team could hear it.

"It's one of our favorite songs, but not at 10 o'clock at night," Richard said.

Richard Smith called Lockport police, who took two detailed reports about the bizarre problem. In one, the officer noted that he could hear "voices and music" and "talking about Christ." Then the officer said he heard a commercial for the Christian radio station AM 1160.

"I'm going to play another example, and you can hear the commentator or the pastor's voice in the wall," investigative reporter Jason Knowles said.

"He is praying over someone for healing," said Richard.

"There it is. You hear this voice echoing through the wall, what do you think?" Knowles asked.

"I think this is about 1:30 in the morning and woke me up out of a sound sleep," Richard replied.

In another police report, Smith said he believes the noise is being transmitted from one of six radio towers just south of his residence. Smith said AM 1160, owned by Salem Media Group, sent out an engineer to investigate the transmission.

"He said, 'I got to be honest with you. I don't know what is acting as a speaker. There is nothing I can explain of why you're actually hearing it,'" explained Smith.

Smith even tore up his daughter's bedroom wall to inspect the electrical grounding, but it isn't helping.

"No, it isn't. So we took a piece out to expose the electrical wire and conduit to come up with a solution," he said.

Smith said the Federal Communications Commission was unable to help.

"It doesn't happen all the time, but it does," said Patrick Berger, director of engineering with Cumulus Media.

Cumulus Media is not affiliated with the radio station playing in the Smith's walls.

Berger said under FCC rules, that station has no obligation to help.

"When it comes to something like this, there is a small amount of people who actually have experience," said Berger.

Berger said the Smiths may have to hire an experienced engineer to pinpoint the issue, using special tools to measure the signal and block it. Berger said an expert can also check inside the wall for corroded piping or duct work, or the placement of metal.

"The metal could act like a speaker," Berger explained. "That is what they are hearing."

Smith said that after several years of on-and-off disturbance, he and his family are desperate.

"I fall asleep in my parent's room," said Brianna.

"Sometimes when we think we've arrived at a solution, the next season comes around, and it's back," Smith said.

The ABC 7 I-Team reached out to Salem Media Group, which owns the radio station, and has not yet heard back. The family said an engineer from the local station has been trying to help them.