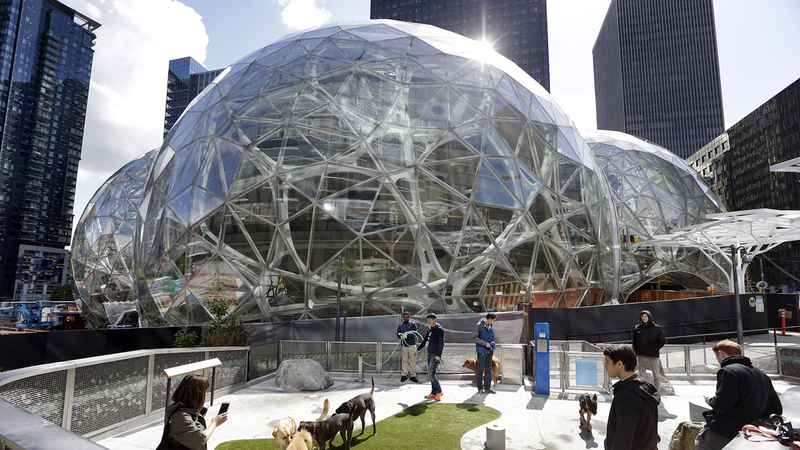 SEATTLE -- Amazon is preparing to open the doors to an interesting addition to its main campus: three massive, glass-covered domes.

They're called the Spheres, and they're essentially large greenhouses containing more than 40,000 different plants. The plant collection, which took years to cultivate, includes selections from all over the world.

The Spheres feature 4,000 square feet of green walls that alone contain more than half of the Spheres' plants. According to Amazon, the walls will help reduce the urban heat island effect, clean the air within the domes and naturally insulate the structure, which is climate-controlled using heat generated by Amazon's nearby data center.

Contained within are meeting spaces and an Italian restaurant and bar expected to open later this year.

While they are primarily intended for employee use, the 90-foot-tall Spheres do contain public retail areas and will offer public tours.

Amazon said the Spheres were originally inspired by biophilia, the notion that "humans have an innate urge to connect with nature."

"In an urban core, to have the ability to lose yourself in a little piece of nature is important, and it can have a great impact," Amazon horticulture program manager Ben Eiben said of the project.
Report a correction or typo
Related topics:
businessenvironmentamazoncool spacesgardeningnatureu.s. & worldscience
Copyright © 2022 KFSN-TV. All Rights Reserved.
TOP STORIES
Loved ones grieve for Missy Hernandez at Fresno vigil
Tax filing season starts Monday. What to expect for 2022
Fresno's famous 'dancing teacher' appears on Ellen Show
5 tax changes that can boost your refund this year
Man hospitalized after shooting in northwest Fresno
Suspect opens fire at birthday party full of teenagers in Clovis
Fauci optimistic omicron will peak in February
Show More
Rescuers use sausage dangling from drone to lure runaway dog to safety
Arnold Schwarzenegger involved in multi-vehicle crash
Deputies investigating armed robbery at Tulare Co. convenience store
President Biden appoints Fresno leader to head USDA post
How a 73-year-old grandmother outwitted a scam artist
More TOP STORIES News