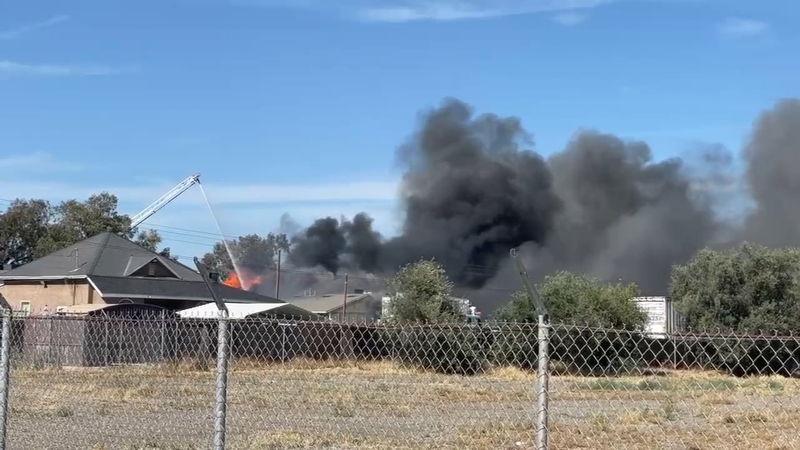 "The embers from the building that was on fire were cast onto a field to the southeast," said Deputy Fire Chief Ted Semonious. "And we had to contain the grass fire on that field."

Residents were forced to flee their apartments at a moment's notice. Caesar Gomez says he's lucky someone came to get him.

"I was home taking a nap and the neighbors came running and banging on the door saying, 'Wake up! Wake up! There is a fire,'" he said. "And when I came out of the front door, all I could feel were flames."

One woman tells us she got her two young kids and baby out of the apartment before it ultimately caught fire. They didn't have the chance to take anything with them.

Fire officials report no injuries, but say a total of three buildings were burnt or damaged. 18 units were deemed a total loss.

"All I can see was the smoke from the fire shooting from the building that had burnt already," said apartment resident Michelle Barnes.

Fresno Fire officials say the building where the fire started Monday also burned back in March. Action News has captured video of flames at Altos West Apartments at least two other times.

In May of 2016, as many as 30 people were displaced. Last October, one family was displaced. Michelle says she hopes her apartment unit won't be next.

"It's scary because the last fire was right behind me," she said.

Action News spoke to the apartment manager who didn't want to respond to our questions about what led to the multiple fires. Fresno Fire officials tell us the apartment building that burned back in March was in process of being rebuilt.

"They were doing construction. They have just received plans to get permits pulled and to start the reconstruction of that building," said Semonious.

Michelle hopes this fire will be the last. Still, she's making sure she will be protected and suggests her neighbors do the same.

"Regardless of what you are going through, get some insurance," she said.