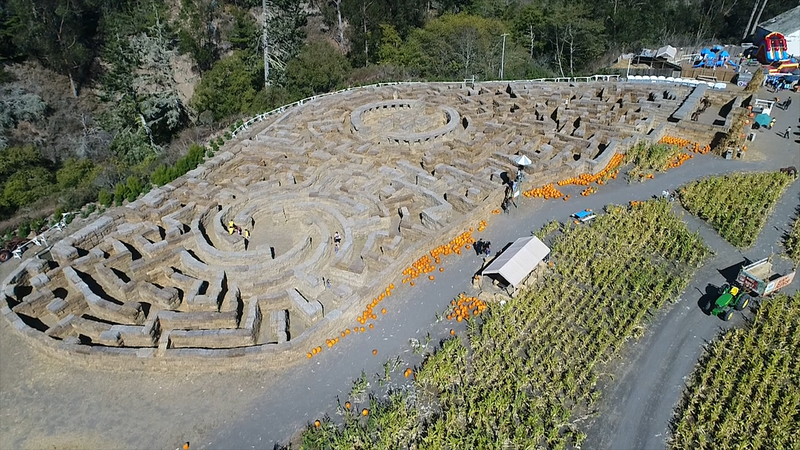 Are you brave enough to try and escape Arata Pumpkin Farm's hay maze?

HALF MOON BAY, Calif. -- The Arata Pumpkin Farm is the oldest working pumpkin farm in San Mateo County, California. Pumpkins have been a way of life here since 1932. However, their biggest attraction may be their 2-acre hay maze called, "The Labyrinth." Take yourself back to Ancient Greece and see if you can navigate through the 10,000+ straw bales. You may be brave enough to face the Minotaur, but the question is: can you escape this world-famous maze?

The world renowned destination along Highway 1 in Half Moon Bay, Calif., which has been around since the early 1930s, has pumpkins, hay rides, haunted houses and more. But nothing is more popular than their more than hay maze.

Welcome to the world famous Arata's Hay Maze in Half Moon Bay. I took on the challenge through the labyrinth. A "good" time is about 15-20 minutes. It took me much longer than that... https://t.co/Sbx95MTM0P pic.twitter.com/fS1vLQpLkt

"The labyrinth is still number one why people come out here because it's so challenging." Chris Gounalakis said. "You have moving walls. You can't see over the walls and you have to go through the pattern to find your way out. Every year is a different design," Gounalakis said. "Everyone thinks that no one is crazy enough to tear it down and put it back up, but that's exactly what we do."

The farm is the oldest working pumpkin farm in San Mateo County dating back to 1932 when John Arata Sr. started the farm with his family.

It wasn't always a pumpkin patch used for families picking out their annual Jack-O-Lantern pumpkin.

But a surprise purchase turned it into just that.

"John Arata Sr. started this farm," Gounalakis said. "Back in the 30's, he sent his children, John and Clarence, to go get pumpkins for the hogs and cattle that he had. In the 30's, the depression years, no one was buying pumpkins. On the way back, a couple of city folks stopped them when they were passing through with their Model-A. They gave them two-bits and they bought a bunch of pumpkins from them. That's how it got started here at the Arata Pumpkin Farm. This is sacred pumpkin ground. The first pumpkins were sold here in the 1930's, so this legacy has been going on for quite a while."

When Chris and Sunneva Gounalakis purchased the pumpkin farm a few decades back, they began to make it their own.

Gounalakis promised Mr. Arata that he would keep the farm going, but he still had an idea to improve it.

"John Arata was the pioneer of the pumpkins and I am the pioneer of the hay maze," Gounalakis said. "Back in Ancient Greece, where I am from, my father was from the Island of Crete. That's where they had the Minotaur and the original labyrinth. I wanted to introduce it here about 15 years ago to show the public what it would be to be stuck in a labyrinth like this. Mazes like this are beginning to pop up all across the country. We like to say that we are the pioneers because when we first made this, it was unheard of to have a straw maze made out of straw bales. The reason that it's world famous is because the world has gotten out all over Europe. When people come here in late July and early August, they're visiting this great highway. So they will see this maze and they come to visit and pass the word out."

Let’s take you inside the Labyrinth. There’s moving walls, dead ends, full circles and A LOT of hay. It’s so hard to remember where you’ve been and where you’re going! https://t.co/Sbx95MTM0P pic.twitter.com/Tjw9EItSId

The maze has stumped guests visiting the farm ever since that first day.

Thankfully he made it out in just under 40 minutes.

38 minutes 55 seconds later... I escaped! I was near the exit, but I forgot which paths I took and ended up walking back towards the beginning of the maze. Can you beat my time? Go check it out for yourself in Half Moon Bay! https://t.co/Sbx95MTM0P pic.twitter.com/uHvR0qk80e

But some people have been said to not be so lucky.

"There was a lady that came in around 2 o'clock one day," Gounalakis said. "Time came to close at 8 o'clock that night and here she comes out 5-6 hours later sweaty and she said, 'oh my god, I never thought I was going to get out of there'. It was so difficult back then that we had to make it more simplistic for people. Someone real lucky can take 10-15 minutes," Gounalakis said. "No luck? More minutes. We have people that come out here that haven't solved it yet."

With an ever-changing path and so many twists, turns and tricks, it's easy for anyone to get lost inside.

The question is: can Gounalakis make it out?

"Right now if I were to go through, I would have an idea of where to go," Gounalakis said. "I don't want to give it away to everybody. But, yes, I can find a way out. Although, we have been making the place in the past where we all got locked out because we closed the right path and we couldn't get out. We had to open a new path. It happens quite a bit."

The maze, like all the attractions at the Arata Pumpkin Farm, are all created for the enjoyment of the guests who visit.

Gounalakis says he just wants his farm to be remembered as a fun place for the entire family.

"When people come here for half an hour, two hours or five hours," Gounalakis said. "They really get this feeling that they are out on a farm somewhere unique and unlike anything that they've seen. That's what we thrive on. We thrive on being so different than everyone else. That's what keeps us so popular here. We've been successful all these years because it has never been about money. It's about making people happy."

Are you brave enough to tackle the labyrinth? Visit Aratas Pumpkin Farm seven days a week in October from 9 a.m. to 7 p.m.