Armenians remember genocide against them on 100th anniversary 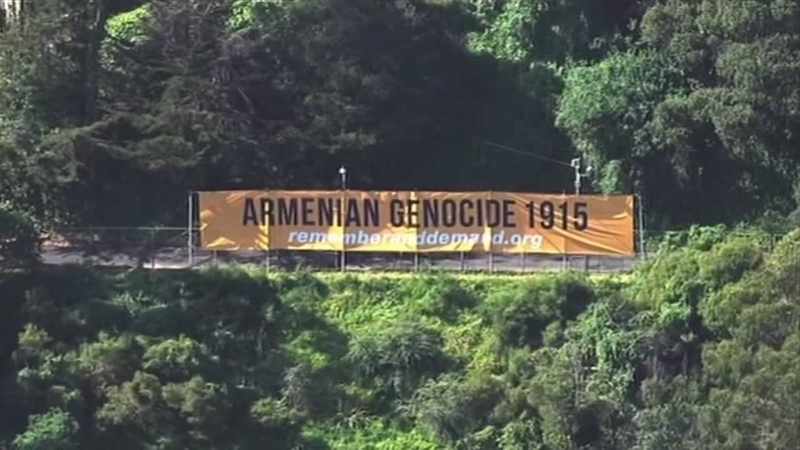 Armenians remember genocide against them on 100th anniversary

TREASURE ISLAND, Calif. -- Drivers taking the Bay Bridge to San Francisco will get some history with their commute in the form of a sign for the month of April.

Armenians around the world are remembering the genocide against them on its 100th anniversary. This was the first genocide of the 20th century.

They put up signs, memorials, even one on Yerba Buena Island. A sign like this hasn't been seen in this area until now.

"And it will be on Muni trains and BARTs and on the 101 and off the Bay Bridge. You'll be seeing in the next week," Armenian-American Kim Bardakian said.

Bardakian is one of 30,000 local members of the Armenian community, many of whom pitched in to pay the Treasure Island Development Authority $10,500 for the prime ad space, one that is supposed to be non-political.

"We did not evaluate it to be political, but more of a memorial of historic events," Treasure Island Development Authority spokesperson Robert Beck said.

The Armenian Genocide began 100 years ago this month. 1.3 million Armenian Christians died at the hands of the Ottoman Turkish government.

"They were killed in the deserts and by starvation and by gruesome acts of violence," Bardakian said.

Even today, however, the Turkish government denies that the genocide ever happened, which does bring in the possible political ramification and begs a question about free speech.

What is to stop another more potentially controversial group from asking for the same space as well or for causing demonstrations?

"We haven't had a problem in the past with messages of a controversial nature being requested or permitted. And we don't see that this opens up a door for that, either," Beck said.

"It's about genocide in general. Hitler is often referred to with a famous quote that he said, 'Who today remembers the Armenians,'" Bardakian said.