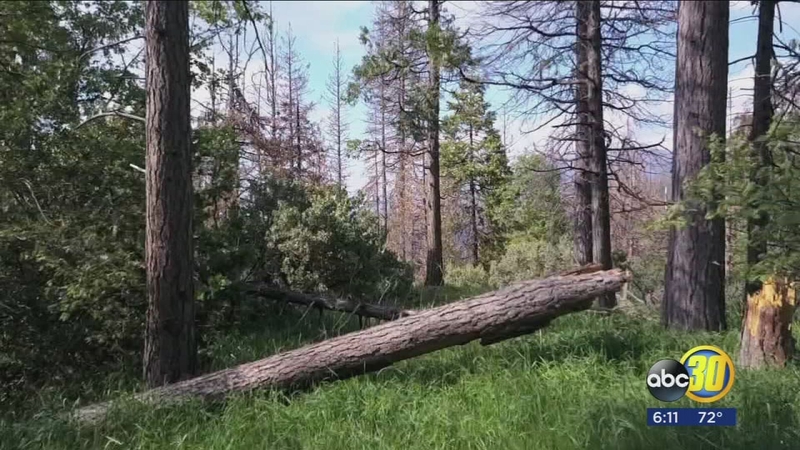 The lack of snow and cold temperatures in the Sierra this winter is allowing a creature of the summer to live during a time when it should be dying.

The Bark Beetle has made a home in California the last several years due to the drought and a dry winter is only making the problem worse.

"The environmental conditions the last few years have lent themselves to the population getting much larger than it typically would be," said U.S. Forest Service Dean Gould.

The U.S. Forest Service says the Bark Beetle will only die off if there is snow with cold conditions in the high country.

"It is nice to get two or three years consecutively of good long cold sustain winters to get that population where it should normally it should be," said Gould.

In the last three years, 129-million trees have died in California because of the insect. 21 million of those trees died in Fresno County and that caused the county to declare a state of emergency back in 2015.

The Board of Supervisors extended that declaration on Tuesday.

"It is required by law that every 30 days we have to issue a new state of emergency to keep it current. The reason why that is so significant is that when to comes to getting reimbursements for our activities in the forest we have to have a current state of emergency in place," said Nathan Magsig.

Most of that money came from grants and funds that were matched by the state.
Report a correction or typo
Related topics:
weathersierra foothillsbark beetlesierrasnowweather
Copyright © 2021 KFSN-TV. All Rights Reserved.
BARK BEETLE
Why is the Creek Fire so hard to control?
Record 129 million trees dead in California due to drought, bark beetle
Political leader fears funding for tree mortality projects may dry up
Political leader fears funding for tree mortality projects may dry up
TOP STORIES
Sierra Unified board votes to keep mask mandate for students and staff
Tulare County offering shelter to animals evacuated due to fires
Memorial held for Hanford marine killed in WWII after remains found
New evacuation warnings issued as Windy Fire grows
CA to mail every voter a ballot in future elections
Flames break out at abandoned tire shop in southeast Fresno
A mother's memories as trial starts in Old Fig murder case
Show More
R. Kelly found guilty on all counts in sex trafficking trial in NYC
California to replace the word 'alien' from its laws
Community Medical Centers sues Santé, surgeons for alleged 'walkout'
Biden receives COVID-19 booster shot
#18 Fresno State readies for game with no fans in trip to Hawaii
More TOP STORIES News