Ben visits the remaining 4 women's hometowns on 'The Bachelor' 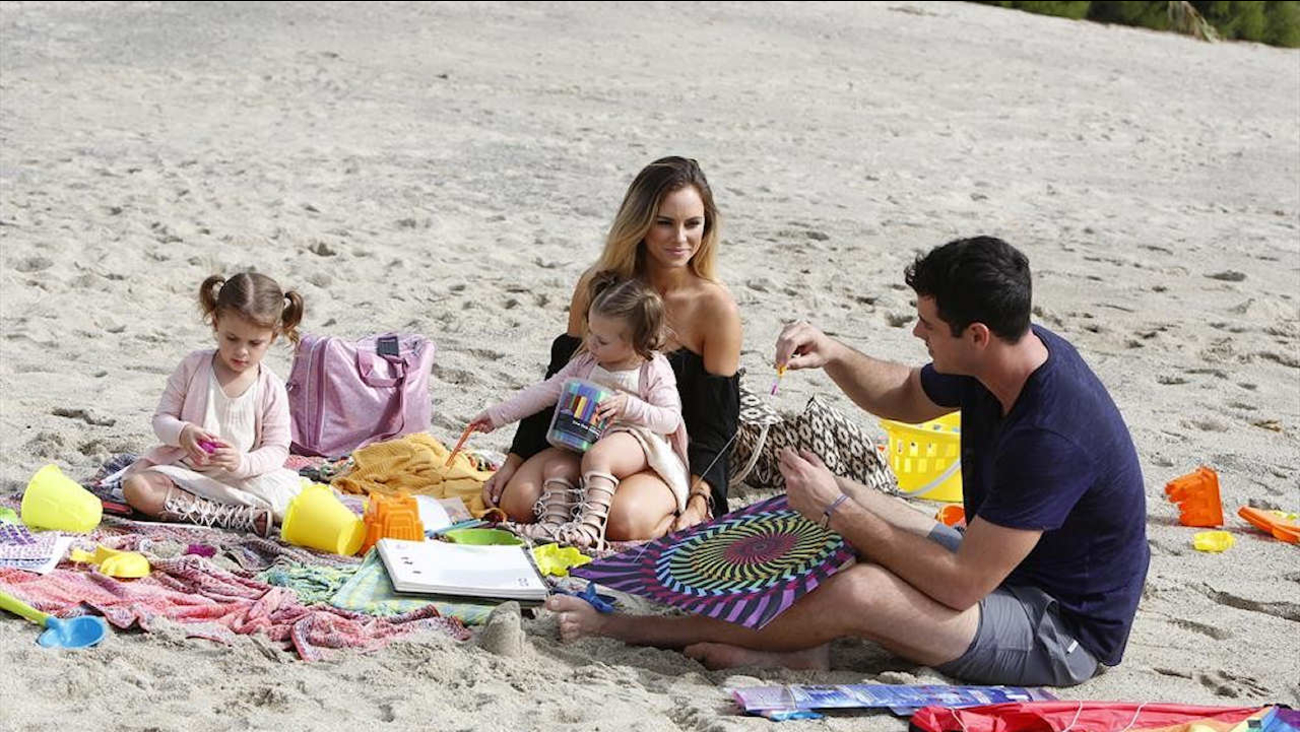 NEW YORK -- It's the best week, hometown dates on "The Bachelor"! It got "real" for Ben as he traveled to the remaining four women's hometowns. His first stop was to Orange County, California to visit Amanda and her little girls. Amanda was super excited to see them and for Ben to meet them. She said that she can't tell if she's in love with him until she sees how he interacts with her children and how they feel about him. It was so sweet when Amanda reunited with her little ones; they were just too cute with their pigtails! Ben was adorable and told the girls that they looked really beautiful that day. He also tried his best to talk to them and get to know them. Kinsley and little Charlie were just the absolute cutest running around on the beach, even though Charlie was a bit shy. 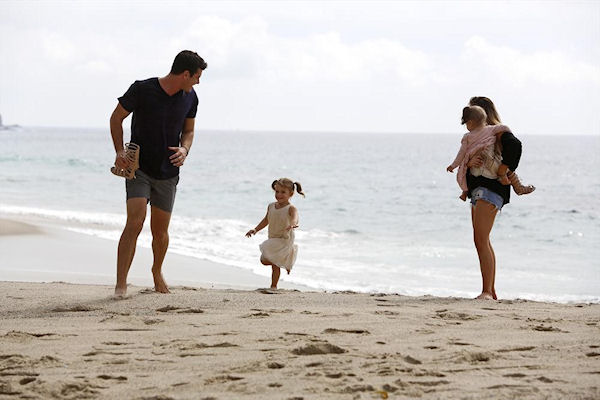 Reality smacked Ben in the face on the way home to Amanda's it seemed. Charlie started to cry, and something tells me that's not the last time that Ben will hear that this evening. They walked into Amanda's home to meet her parents. Her dad thought that Ben looked a bit like a deer caught in the headlights. They want to be sure that Ben knows what he's getting himself into. He had a great talk with Amanda's parents and they left their conversation with him feeling that the situation was "promising". Ben read the girls a bedtime story and Amanda fell in love. 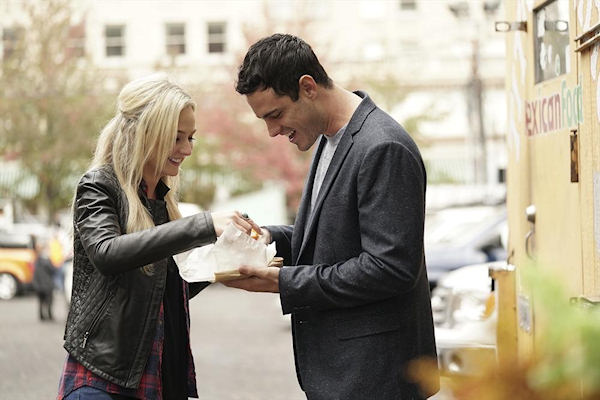 Next, Ben met up with Lauren in Portland, Oregon. Lauren wants to try to tell Ben that she loves him once he meets her family. First, they took a little walking tour of Portland. They went to an area where all the food trucks parked to have lunch and try some new things. Then, they went to a "whiskey library" to try some different whiskies and sit by a romantic fire. They talked about how Lauren considered leaving because she missed home, but he's so thankful that she didn't. 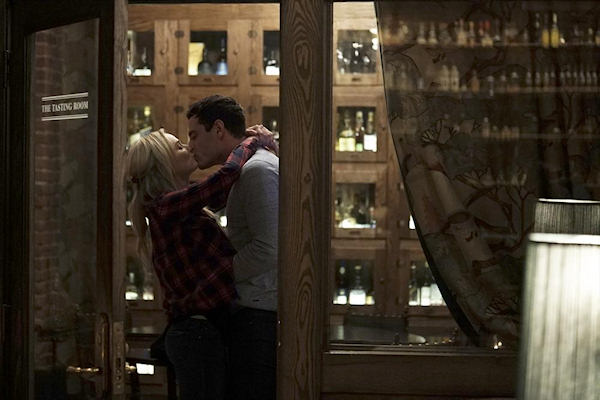 Her parents, sister, and two brothers gave Ben a nice warm welcome. He had a chat with her sister about whether or not he's legit and she found that he seemed to be. She's still slightly hesitant about Ben, but that stems from the fact that she loves her sister and doesn't want to see her get hurt. Ben started to cry when he talked about what stood out to him about Lauren! Lauren said to her sister, "I feel like Ben is my person." Aw! She added that she's "definitely in love with Ben, 100%". Ben meantime, revealed that things were very real with Lauren, but he revealed that he's not doing too well in the fact that he has to have this same talk with three other dads. Ben just doesn't want to hurt anyone's feelings. Her father told her that he just wants her to keep in mind that there are other people involved still and not to get too wrapped up. She wanted to reveal her love, but decided to hold back instead! Oh dad! He totally got into her head! 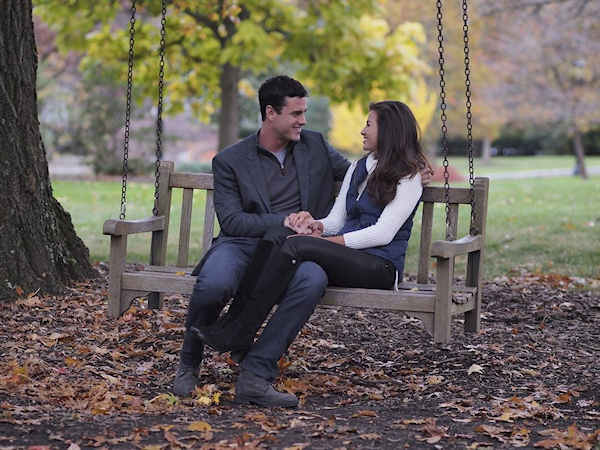 Ben moved onto Hudson, Ohio to visit Caila. He said that he has "the deepest" relationship with her so far because she's so "real". Caila lived in Hudson since high school, but before that she moved around a lot. She brought him to a bench swing where she said she always wanted to bring someone special, aw! Caila's dad is actually the CEO of a toy company, so she took him there to design their own toy playhouse! Once they designed it, they actually went to the factory to build it! It came out really cute and it was fun to see them operating the mold presses and everything in the factory. 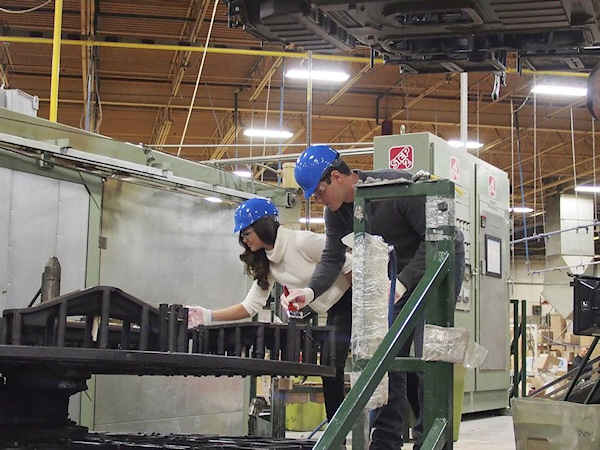 When they sat down to dinner, Caila's mother explained the Filipino meal to Ben. It was very sweet how accommodating they were to Ben and how welcoming they were. They admitted they were on pins and needles to meet him! Her father talked about how rewarding it is to be a part of the Filipino community and his experiences with how amazing the community has been since he married Caila's mother. It's adorable how in love they still are! Ben and Caila's mother talked about how she doesn't take any moments for granted and that she has very high standards in a relationship. Ben even shared his fears about being "unlovable" with her mother. They really seemed to bond. Caila told her father, "Daddy, I know this is it." He said that he prayed that this would be it for her as well. He seems like the world's most sensitive and amazing father. During her talk with her mother, her mom urged her to tell Ben that she loved him. She thinks that Caila should just go for it. As Ben said goodbye to her in the driveway at her parents' house, she chickened out and didn't tell him! She said that she couldn't fully trust him and the "scared feeling" is still lingering and "Ben deserves better than that." 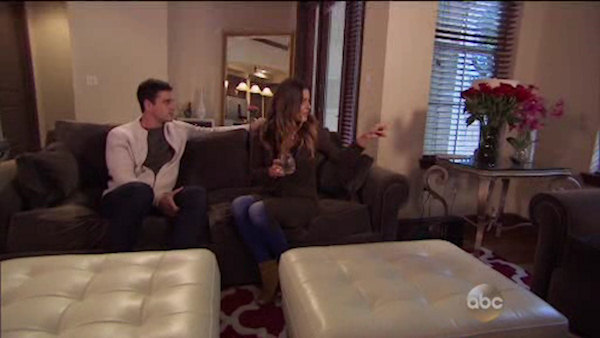 The explosive interaction that's been teased all week was finally upon us. Jojo's crazy brothers meeting Ben and confronting him. Before we could get to that, Jojo arrived home in Dallas, Texas to a vase full of beautiful roses from Chad, her ex-boyfriend! She said "NO, no, I'm not reading that, that's not what I want to read." She thought they were from Ben, but they weren't! Jojo started crying and she revealed that she loved Chad with her whole heart, but he repeatedly walked away from her. She called him on the phone and luckily for us, we got to listen in! He tried to tell her that he "knows what love is now" and that he still loves her, but Jojo just seemed upset and exasperated. Jojo was still talking to him on the phone as Ben was walking up to the front porch. She burst into tears when she saw Ben and laid a big kiss on him. Ben was confused as to why he was crying, but then she explained the situation to him. Ben said that he feels very uncomfortable when past situations are unresolved. She told him that she called him and ended it for good. He even said "Thank you for making the phone call, and I wish I could have sat beside you while you had to make it." That's a great response! Jojo even told Ben that she loves him.

If you think that's the worst of this date, buckle up. They headed to her parents mansion where she received a hero's welcome from her brothers, sister, and her parents. It was way over-the-top. At the dinner table, they made it pretty clear to Ben that they'd like Jojo to remain in Dallas and not move away. Her brothers got upset seeing how happy Jojo was around Ben when he still has other women in his life, and frankly, they said they couldn't tell what was so special about him. Ouch. They really seem out to kill her happiness! 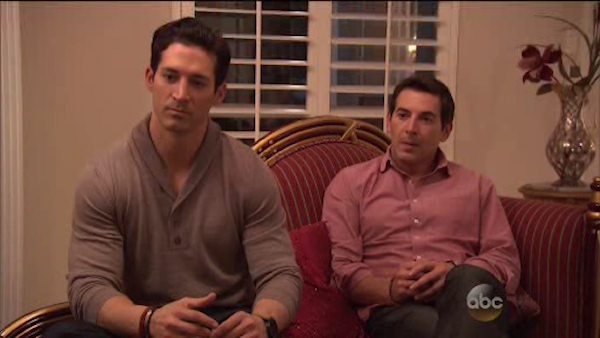 Ben sat down with her brothers for a talk and he tried to tell them that he and Jojo are in a really good place and they have some important conversations coming up. He added that it's "real" and that Jojo means a lot to him. In another room, Jojo's mother tried to give her a pep talk into falling in love with Ben and just going for it. She told her to "Go 150% on this one". With Jojo's dad, he wanted to know how Ben will make her feel secure, and he said that he's trying to let her know that he's a man that's worthy of her trust. He said that he didn't want to "make a ton of promises today," but that his feelings grow more and more each time he's around her. Hm, I'm not sure that I love that answer. Jojo spoke with her brothers who tried to remind her that she's only had two real dates with Ben and that there's no way that she's in love yet. They warned her to keep her heart guarded. The brothers told Ben to his face that he was "brainwashing" the girls, and that they are bothered to see her so affectionate towards him when they don't get the same read back from him. They also told him they thought his answers were rehearsed. The brothers said that he hates seeing her more into him than he is to her. They didn't feel like they got the truth out of him. They also talked about the couple holding a "poker face" while they were feeling different emotions on the inside. Ben's mom was very sensitive to Ben's position and said hey guys, it's not easy for him either. Outside, Ben told her that her brothers made the comment that he had a poker face on, and she was upset that they said that, and the night ended on a very confused note. 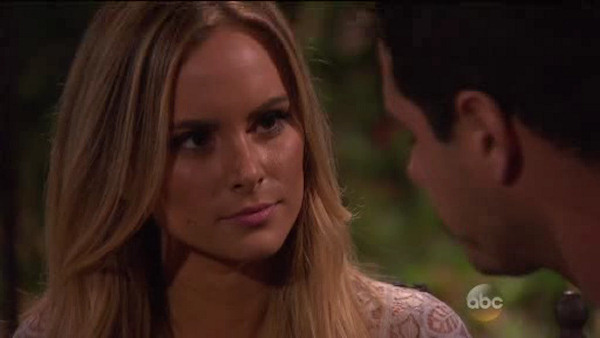 At last, it was time for the rose ceremony. Ben had four women head over heels for him and this would not be an easy breakup. Lauren, Caila, and Jojo got roses. Poor Amanda, she got cut. My heart breaks for her! Ben sat Amanda down outside and apologized. She told him that she wishes that he would have told him sooner, instead of making her come back to LA to get dumped. He said that he didn't know how he felt until after the other hometowns. He said that his feelings for the others were stronger, but that doesn't take away from how amazing she is with her daughters and her family. He added that he wished for great things for her. Amanda told him that she would miss him. She was sweet and gracious right until the end. She should be proud of how she carried herself on this show. They had an extra-long hug outside the limo, and off she went into "Bachelor" history. Do you think she would make a good "Bachelorette"? Share your comments with us!