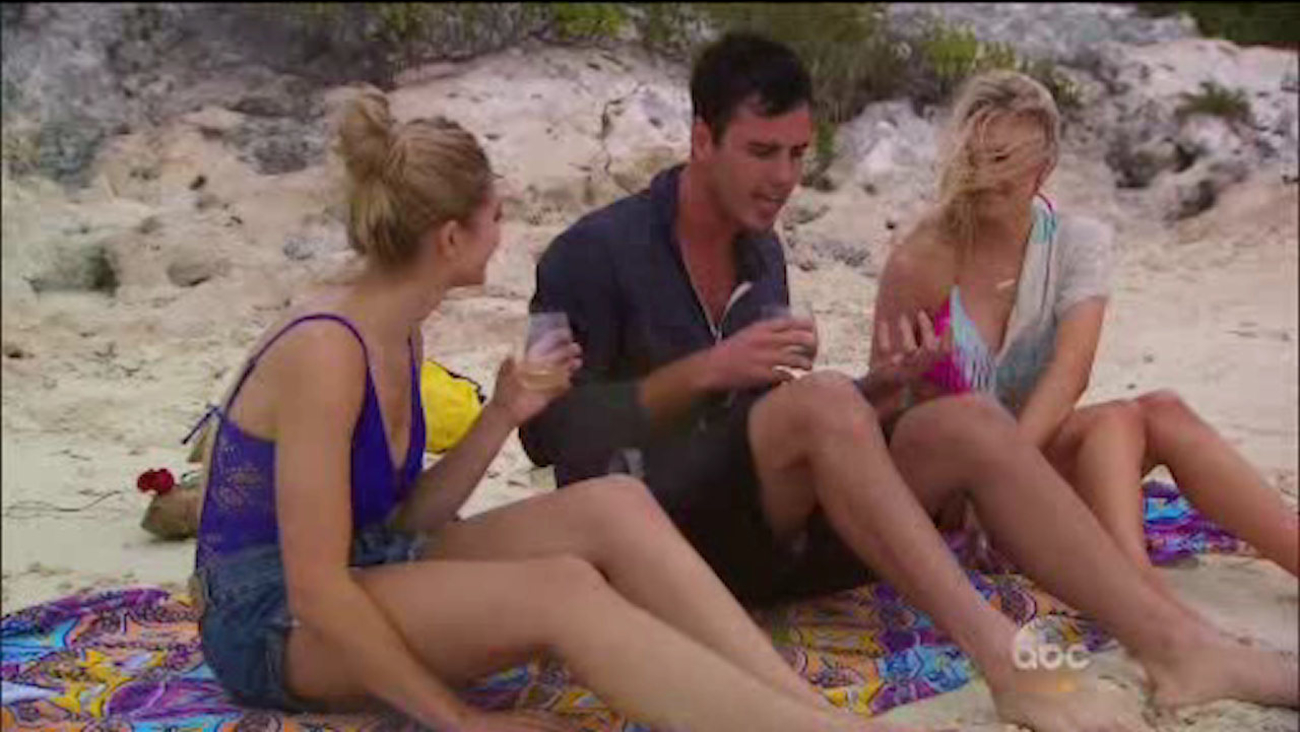 NEW YORK -- This week's "The Bachelor" began where last week's left off. Ben confronted Olivia about some of the things that the women were telling him about her. She told him that by giving her the first and second rose, it put a target on her back and that they think she's too aggressive because she always grabs him. She says when she holds back, the other women that she's not social enough. She added that she likes to talk about "smart things" and not sit around and paint her nails like the other ladies. She said that when he asked her about how everything is going, she said fine because she "can handle anything." She turned on the tears just a bit, but then walked back out on to the patio with him still holding her rose. He thanked them all for being there, and then Ben walked off with Chris Harrison to make his selections.

To refresh your memory, Amanda, Olivia and Lauren H. already have roses. To that, he added: Caila, Lauren B., Jojo, Becca, Leah, and Emily. That meant Jennifer was eliminated. Then, Ben told the remaining women that they were headed to the Bahamas!

Chris Harrison dropped off the first date card and it read, "Caila, Let's see if our love is real." This is big! Caila is getting her second one-on-one date! Other women, especially Leah were super upset that she still hasn't had a one-on-one. She started dropping some expletives showing that she has a sassy side. Right as Leah was crying and looking super upset, Ben walked in and sat down right next to her. She wouldn't even look at him! 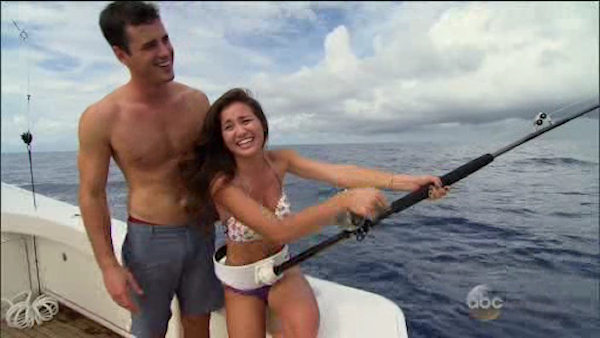 Ben and Caila walked off to a pier where they boarded a yacht to do some deep sea fishing! Ben said that although he had a one-on-one with Caila, he still doesn't really know her very well because of Kevin Hart and Ice Cube being on their first date most of the time. They had a great time fishing and Caila looked so tiny next to those giant fishing poles. 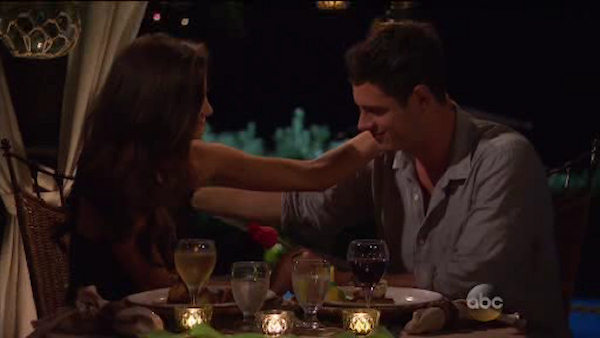 During dinner, Ben asked her about how she smiles all the time. He was like, how are you during the tough times; do you just smile or what? She told him that she isn't ready to be super vulnerable and cry on his shoulder right away. She even said that she felt "put on the spot". Caila dropped a bomb saying that she feels like she loves him, but still can't open up. She said that while his greatest fear is being unlovable, hers is that she might break his heart. Ben tried really, really hard to figure out if she was ready to find someone. He asked her, "Are you really falling in love?" She told him that she feels like she is being "understood" and that's how she knows that she is falling in love because that's what she wants out of life, and also she understands him. He said that he liked that she was a little confusing because it means that she's not just the smiling, perfect girl and he knows she's the real deal. With that, he offered her the rose and she eagerly accepted it.

There was a knock at the door and it was the group date card! It read, "Love is unpredictable" and it was for everyone except Olivia and Emily! Oh boy, those two hate each other right now! Let's see what happens. 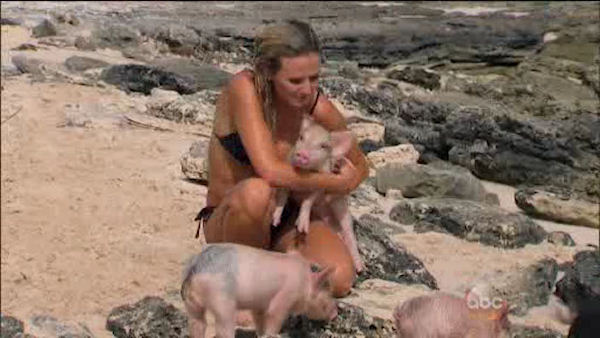 The next day, Ben met up with the women for their group date. They boarded a pontoon boat and did some shots. They pulled up towards an island, and there were pigs swimming! The women learn that they will get to feed the pigs and swim with them! The pigs were pretty aggressive though! The babies were adorable; you could totally pick them up and feed them hotdogs and stuff. It seemed like a great time!

After they were done feeding the pigs, the ladies noticed that Ben was obsessing over Lauren B. They all thought that he was spending too much time with her. Jojo and Ben eventually had a talk about how things had gotten awkward and there are six women on the date. Ben said that he liked that Jojo usually gets him, but she clearly wasn't that into this date at all. Leah was off sulking by herself when Ben finally came up to her and asked her if she was ok. She asked him why he gave Caila another one-on-one when she hadn't had one yet. She said that she's turned into a "group date groupie". Ben asked her just to make the most of it for now, and then gave her a hug. It was just awkward. Leah didn't feel better after the talk though, she said that she almost felt worse. 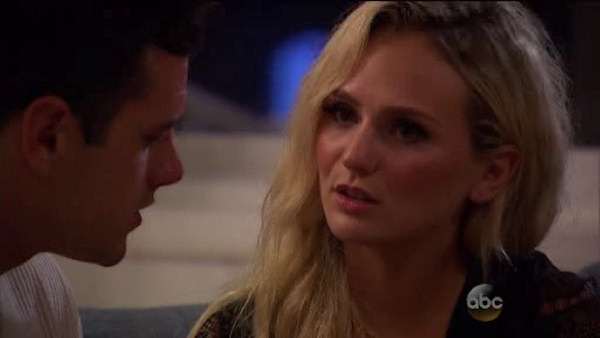 In the evening, Ben wanted to talk to a lot of the women to make sure that they are OK and see where he stands. Ben told Becca that she was standoffish to him and she said that she was because she saw him with Lauren B. She told him that he's not doing anything wrong, but added that she really, really likes him. They did some kissing, despite the fact that he likes someone else more. Sheesh. He had some good conversations with the other ladies, but then it was time for Leah. She made the mistake of bringing up that some people aren't there for the "right reasons". That never plays well. Then, she brought up Lauren B! I haven't heard anyone complain about her, and Leah tried to throw her under the bus. I think she's just jealous of her. Ben brought it up to Lauren B. and she was caught off guard and she should just tell him to be smarter! That's nuts! Lauren went back to the couch and cried and Leah pretended to not know what it was about and lied to all of the women saying that she would never bring someone up to Ben. Poor Lauren just sat there crying on the couch. After Ben was done making the rounds, he picked up the group date rose and offered it to Amanda. She was very excited to accept it. I'm so mad at Ben for letting Lauren sit there with her weepy red eyes! 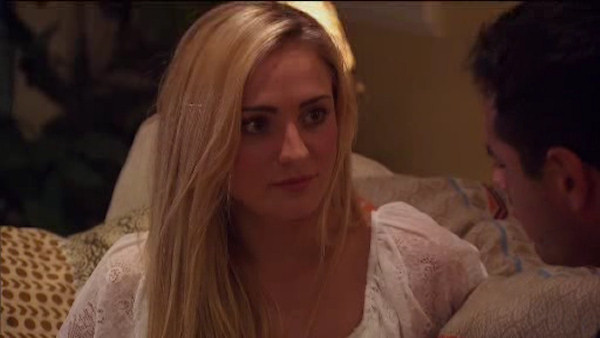 Later, Leah ran off looking for Ben's hotel room to have a talk with him. She would like to finish running Lauren B. over with her bus apparently. Ben let her in his room and poured some glasses of wine. She told him that they see a lot more in the house than he does. She even called Lauren B. catty. Ben said that he realized that there was disconnect between the two of them, because they were spending all of their alone time talking about Lauren B! Ben told her that he's never felt more for her than he did that first night and something just didn't feel right. Ben told her that he didn't want to pull her through this process anymore and he thought it would be best if they said goodbye. Then, he walked her out! Yay! Lying and talking about others really never goes well for people on this show. 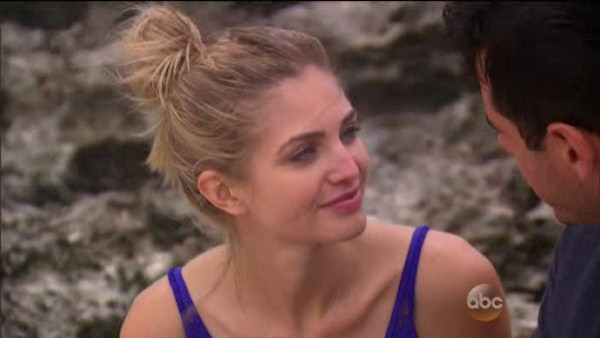 For the two-on-one date, Ben met up with Emily and Olivia and they took a boat on a very windy day to a private beach. Why do they always go out into the middle of nowhere for these dates? I'd be like, go talk to her back at the pool at the hotel, I'll wait at the bar for my turn to chat! Olivia was up first and she told Ben that she just wants to be herself and not force herself to be friends with someone she doesn't like and she just loves herself. She talked about herself the whole time. Maybe she should consider getting to know someone else by asking them about themselves. She suddenly blurted out to him that she's in love with him and he didn't seem super happy about that. 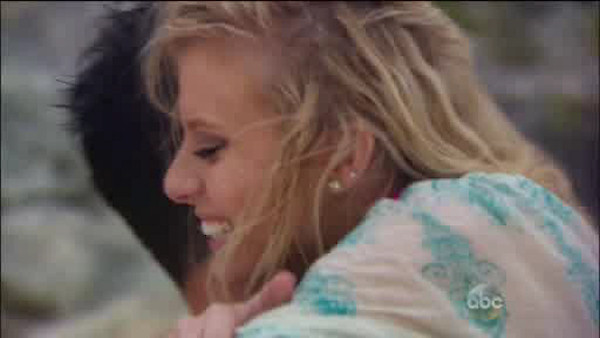 So he went off with Emily and they talked about how she's grown so much over the past few weeks. He also talked about how much he liked meeting her mother and just what a great person she is. He walked her back to where Olivia was sitting and the rose was sitting there. He picked up the rose and asked Olivia to take a walk with him. He told her that he appreciated that she was speaking from her heart but, he said that he didn't think he could reciprocate those feelings. Why is he holding the rose? That's just so cruel! Then, Ben walked over to Emily and said that he wasn't ready to stop the journey with her and he offered her the rose. Olivia watched in the background and just stood there. I actually felt awful for her. 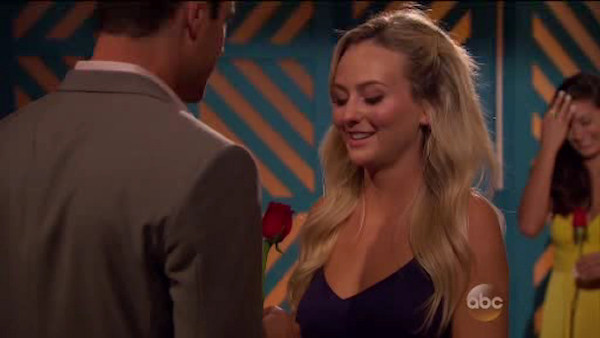 After the hellish week that Ben had, he decided to cancel the cocktail party and move right on in to the rose ceremony. Lauren B. was terrified that Leah's comments ruined her chances for love with Ben. Jojo was also very concerned that they hadn't had a good conversation that week. He decided to give roses to Becca, Jojo, and Lauren B. They join Caila, Emily, and Amanda who already have roses. There's your final six! Lauren H. was eliminated and Ben didn't really say anything to her about it. Just walked her to the car and gave her a hug. The preview for the rest of the season, and the finale, looks insane. Does Ben eliminate someone and then ask them back? It's so confusing! I guess we'll have to wait and see.
Related topics:
arts & entertainmentben higginsthe bachelorcominguproses
Copyright © 2021 KFSN-TV. All Rights Reserved.
COMINGUPROSES
Lance Bass: 'Guest-hosting 'Bachelor in Paradise' a dream come true'
David Spade brings levity while guest hosting 'Bachelor in Paradise'
Katie gets her happily ever after on 'The Bachelorette'
Shocking falling out shakes 'Bachelorette' Katie's confidence
TOP STORIES
KNP Complex Fire: Giant Sequoia General Sherman in protective blanket
Employee's criminal conviction prompts explosive day at City Hall
Remains of WWII Marine from Hanford returning nearly 80 years later
Valley school dedicates gathering area in memory of teacher killed
Police searching for suspect in series of NW Fresno robberies
1 person shot in northeast Fresno, police searching for suspects
Auction house full of items in Madera County burns down
Show More
Man arrested for allegedly shooting mother's boyfriend in Fresno
Video shows Gabby Petito's police encounter before disappearance
Evacuation orders issued for some near Windy Fire
Yosemite Unified parents voice concern over district's COVID protocols
Armed, innocent homeowner shot during Reedley PD pursuit of suspect
More TOP STORIES News