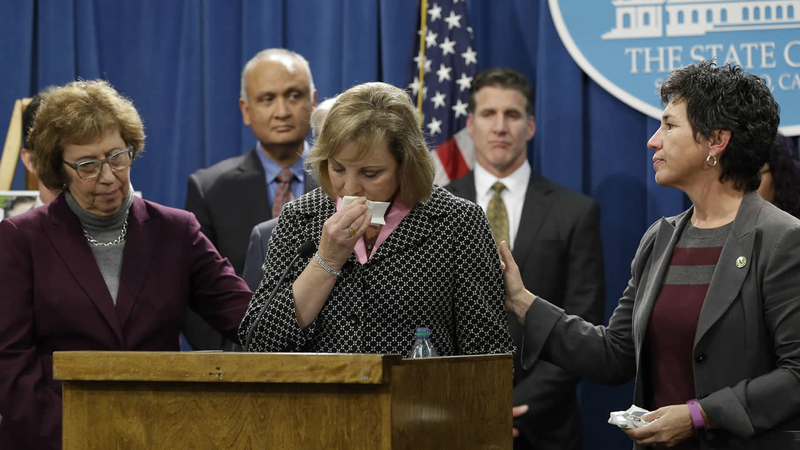 SACRAMENTO, Calif. -- The family of a terminally ill Bay Area woman who moved to Oregon so she could exercise her right to die went to the state Capitol in Sacramento on Wednesday. Brittany Maynard's husband and mother stood side-by-side with lawmakers, trying to change the law.

It was an emotional news conference. Maynard's mother, Debbie Ziegler, said her daughter did not have a suicidal bone in her body. But given a terminal diagnosis, she just wanted a say in how she died.

"Stand up and make your voice heard, even if it shakes like mine," Ziegler said.

Through her tears, the mother told reporters that her daughter desperately wanted to die at home in the Bay Area. But instead, Maynard and her family move to Oregon, because ending one's life is not legal here.


"We had left friends," Ziegler said. "We'd left our supportive network. And yet, Brittany and I felt appreciative of her legal right in Oregon that she could decide when enough was enough."

The 29-year-old was diagnosed with terminal brain cancer on Jan. 1 of last year. Maynard, along with her husband and parents, moved to Oregon so she could qualify there for what's called an aid in dying medication. It's one she used on Nov. 1. Oregon is one of five states where the practice is legal.

"Recognizing that we had to move to Oregon, she just felt was a huge injustice," said Maynard's husband, Dan Diaz. "And so, I made a promise to do what I could to help this effort to bring legislation to California."

Now, Maynard's family is standing behind lawmakers who authored SB 128, the "End of Life Options Act" for terminally ill adults.


"Facilitated by a pharmaceutical prescription only after the strict criteria are met," said Sen. Bill Monning, D-Carmel.

Tim Rosales is with Californians Against Assisted Suicide.

"If you look at the Oregon data, they are choosing this they say because they fear being a burden, or they fear of losing control," he said. "It's not suffering and it's not pain."

SB 128 would allow those with six months or less to live to choose to end their life with a prescription medication. At least two doctors would have to confirm the terminal diagnosis.

For the latest details on Brittany Maynard's passing and right-to-die legislation, click here.