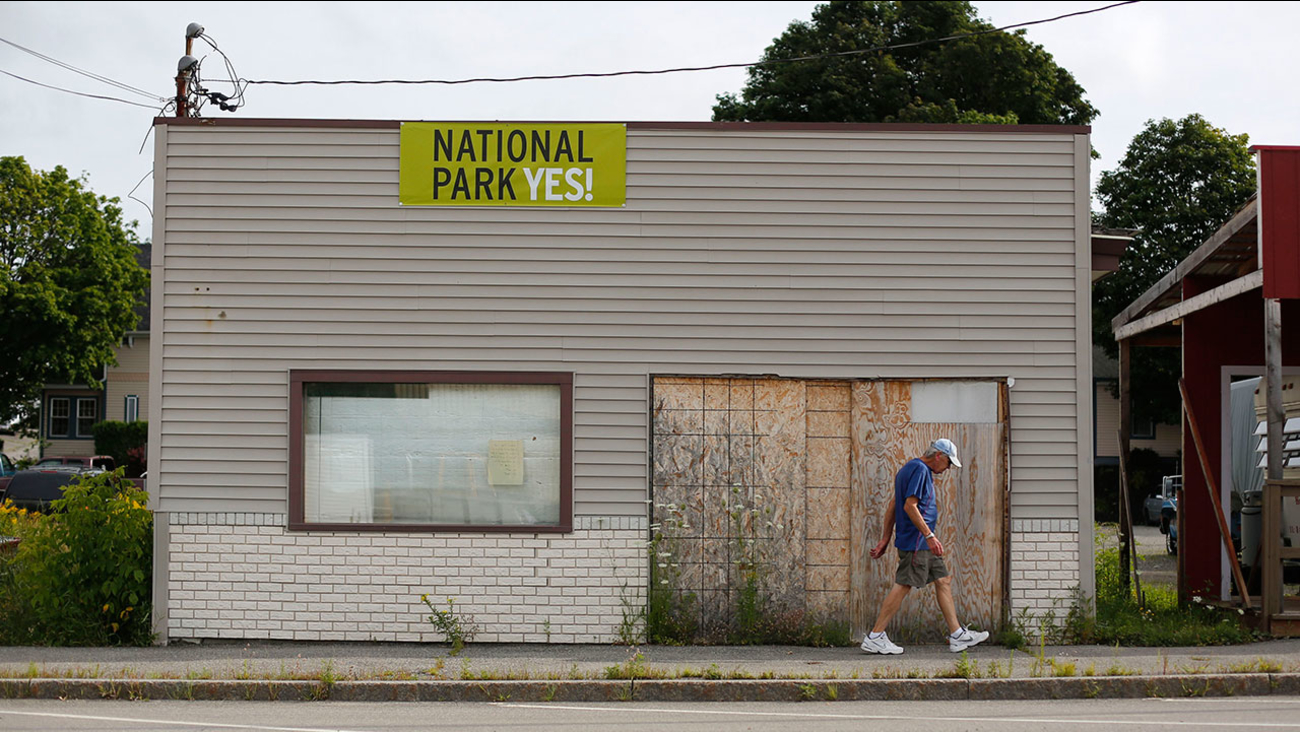 AP
TOWNSHIP 3, RANGE 8, Maine -- The rolling forests where Henry David Thoreau once paddled a river in the shadow of Mount Katahdin are at the center of a fight over a $100 million offer by the founder of Burt's Bees to create the nation's next national park.

Roxanne Quimby wants to donate 70,000 acres of woodlands - and millions of dollars - for a Maine Woods National Park. But critics who don't want the federal government intruding into their lives are willing to reject what many view as an economic lifeline for a region that's struggled with double-digit unemployment since a pair of paper mills closed down.

"Nobody in this area is open to the federal government and the regulations that would come along with it," said Bryant Davis, a former Great Northern Paper worker who runs an outdoor guide service and serves on the Millinocket Town Council.

Nonbinding votes conducted this summer showed residents in Medway and East Millinocket - both hit hard by the paper mill closures - opposed the proposal by a 2-to-1 margin. But supporters say a new national park would be a boon bringing hundreds of jobs.

"It's a $100 million investment in region that needs it," said Lucas St. Clair, Quimby's son who's now marshalling the effort and recently returned from lobbying Maine's congressional delegation. "And there's no other investment on the table."

Quimby went public with her bold plan to donate a swath of wilderness next to Baxter State Park, home to Mount Katahdin and the northern terminus of the Appalachian Trail, in 2011. The current proposal calls for donating land valued at $60 million and providing $40 million more - $20 million from her foundation, $20 million from private donors - to fund park operations.

Quimby also envisions providing a similar-sized parcel that would be conserved for hunting, snowmobiling and other recreational opportunities. All told, the park and recreational area would be capped at 150,000 acres.

Yet there's been fierce resistance.

Critics used to say the land was needed for trees for the paper industry, but that argument has faded as the mills went away. Now, concerns over government regulation are a chief focus.

Millinocket Town Councilor Michael Madore called the park a "foolish dream." He said it wouldn't produce the promised jobs and that regulations aimed at protecting park vistas would limit industries in surrounding towns.

But St. Clair believes the noisy opposition is drowning out a silent majority.

The latest local voting results were better than 5-to-1 opposition recorded a few years ago, he said, and a private poll of the broader 2nd Congressional District shows support from two-thirds of respondents.

"Critics oftentimes get the microphone and they're the loudest," St. Clair said.

Changes that are taking shape on Quimby's land - currently known as Katahdin Woods & Waters Recreation Area in an unincorporated plot designated Township 3, Range 8 - lend a glimpse into what a park might look like.

A rough loop road includes a stunning view of Mount Katahdin, the state's highest peak, and hiking trails lead to several nearby summits. Existing camping areas were used this summer by artists, Boy Scouts, summer camps, educational programs and Colby College. Several boat launches provide access to the East Branch of the Penobscot River, which Thoreau rode on a flat-bottomed bateau on his final visit here in 1857.

The view is not so pretty a few miles away in the towns the paper industry once dominated.

One former Great Northern Paper mills is being gutted and the other has been torn down. Young people are moving away. Houses have gone on the market for as little as $10,000. And unemployment, which soared to nearly 20 percent a few years ago, remains in the low double digits - twice the state average.

Quimby initially set an unofficial goal of completing the transfer to the federal government by 2016, the 100th anniversary of the National Park Service. St. Clair said he's optimistic that the aggressive timetable can be met.

Congressional approval would be necessary for the proposal to become a reality. Sens. Susan Collins and Angus King aren't ruling out support for the park, but say it must have local backing.

"Robust local support is essential for the success of any new endeavor," they said in a joint statement. The recent local votes "demonstrate that serious concerns remain about the national park proposal."

The National Park Service, meanwhile, has taken no position on Quimby's offer.

Marsha Donahue, who owns an art gallery in Millinocket, said critics like to suggest that a park could hamstring economic development but no one has offered an alternative.

Even if it created only a fraction of the hundreds of jobs supporters predict, it'd be better than nothing, Donahue said.