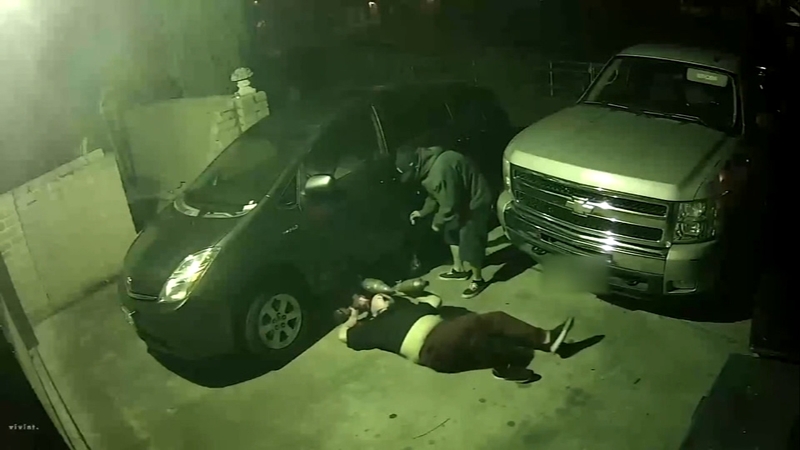 FRESNO, Calif. (KFSN) -- A catalytic converter crime wave is sweeping across the Valley in recent months, disabling dozens of cars, and costing people thousands of dollars.

They came under the cover of darkness, but surveillance video recorded the crime in front of this southeast Fresno home.

Two men took less than two minutes to jack a car up, get under it, and get away with the catalytic converter.

The same crime has repeated dozens of times over the last month in the Fresno area, including in this Tower District neighborhood, where Amy Elliott heard a strange sound when she turned the key in her Prius.

Her mechanic told her someone cut off her catalytic converter.

"He told me 'I got some bad news for you', and he told me how much it was going to be," Elliott said.

Hank Nishimoto says the first and second-generation Priuses are top targets for catalytic converter thieves because they have some precious metals inside.

He says the waiting list to get a replacement is about 2,500 names long and it takes a month, which can tempt some people to buy a used part.

Thieves can make a lot of money in that market too.

"It's against the law for them to do that, but it's stolen anyway, so what do they care?" Nishimoto said.

Even though California law doesn't allow the sale or installation of used catalytic converters without a special state exemption, some people advertise for them on Facebook.

Fresno County sheriff's deputies say certain crooks specialize in catalytic converters and they usually know who will buy the parts.

"It's a very dirty business," said Tony Botti of the Fresno County Sheriff's Office. "You have to have obviously the crook who takes it and you have to have somebody who owns a business who wants to be complicit in this."

Sheriff's deputies and their partners at CHP confirm a wave of catalytic converter thefts, including three in just a couple of hours Friday.

They say you should ask to see the part before it's installed in your car and even engrave it.