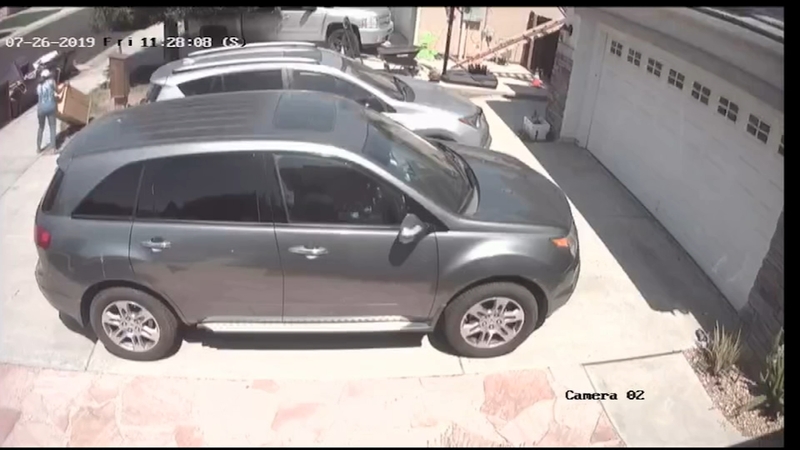 CLOVIS, Calif. (KFSN) -- Surveillance video captured by a Ring camera shows the theft in one Clovis neighborhood. The apparent treasure hunter browses through the items in the street, then spots something better in the front yard.

Cameras were rolling as she tossed out the books at the quaint neighborhood library and took the shelf. The item was later posted for sale on Craigslist, and the frustrated homeowner tracked it down and got it back.

Her story isn't very unusual, according to Clovis Police Sgt. John Willow. It's more common than you may think.

"Some people leave their garages open during the day, and all of the sudden it's community clean up and sometimes things disappear from garages," he said. "Or the kids will be out playing, and they will leave some things in the front yard close to one of the cleanup piles, and those items will come up missing."

The highest call volumes are for neighbors reporting suspicious vehicles. Trash scavengers usually drive by slowly with their eyes peeled.

"There's a bunch of people out here, scrappers, you got other people that pick up clothes. And you got other people like me that will go around picking up things they can turn over really quick," said junk collector Paz Martinez. "Actually, they throw a lot of good furniture out."

Martinez makes a living out of his side hustle. Monday through Wednesday he collects. Thursday and Friday he refurbishes and spiffs up, and Saturday he holds is his yard sale.

He's been in the business for 10 years.

His days are spent picking through what some consider trash. Paz starts his days at the city yard, following the disposal trucks. Over the years, he's been hugged and cussed out, by both residents and other junk collectors.

Messes left by other treasure seekers makes him mad.

"And if I see them I tell them, don't do that. That's not cool because you mess it up for the rest of us," he said.

"I could tell that he was looking for some bigger, nicer items, kinda household stuff, so I happened to have an old TV that's still working that he can use. So I approached him, and he gladly took it," Huber said.

This professional recycler had a good day on the streets Monday. He managed to get a working refrigerator he thinks he can re-sale for at least 50 dollars. He says that's food on the table.