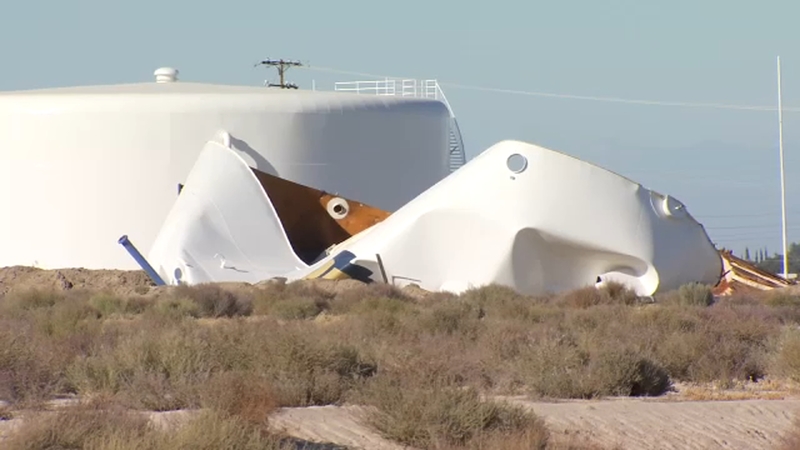 Here’s a look at the released video of the aftermath from the City of Lemoore. @ABC30 pic.twitter.com/vrlkenUBAF

"As the contractor started to weld, an explosion ensued, the tank separated from the ground, lifted up approx. 70 feet vertically before a tsunami occurred, causing major infrastructure damage to the well site 7," Olson said.

That explosion and rush of water left 41-year-old Dion Jones dead and city employee Jeramey Climer injured. Olson became choked up as he shared more about who Jones was.

"Mr. Jones is married with 3 children," he said. Olson said Jones also worked as a union carpenter for his current company for 16 years.

Olson says Climer was released from the hospital Monday night and is resting at home.

A state of emergency was issued in Lemoore Tuesday.

Customers cannot water their lawns, wash down concrete, or spray down vehicles until further notice.

"Water conservation is much needed now and the focus for water use is on the residents and local businesses to maintain operations," said Olson.

He said fire suppression will also be key. For any mutual aid fires, Kings County Fire Department will be bringing extra trucks filled with water to help with conservation.

Olson said some customers and businesses may have low water pressure or discolored water, but he says the water is safe to drink.

At Subway, about a mile away from the water tank explosion, the water is clean, but water pressure has been low in parts of the restaurant.

"Usually, we have full pressure and today, we have just a little bit," said manager Christina Gallagher.

Gallagher said she hopes they figure out a solution to get the water fully back up and running so it doesn't slow down business.

"My main concern is not having water to wash our hands to clean our restaurant, to provide for the community," Gallagher said.

Lemoore's city manager said there is a chance a boil water notice could be issued in the coming days if the city is unable to keep the water pressure up.

Officials will be posting updates for customers on the city of Lemoore's website which can be found here.