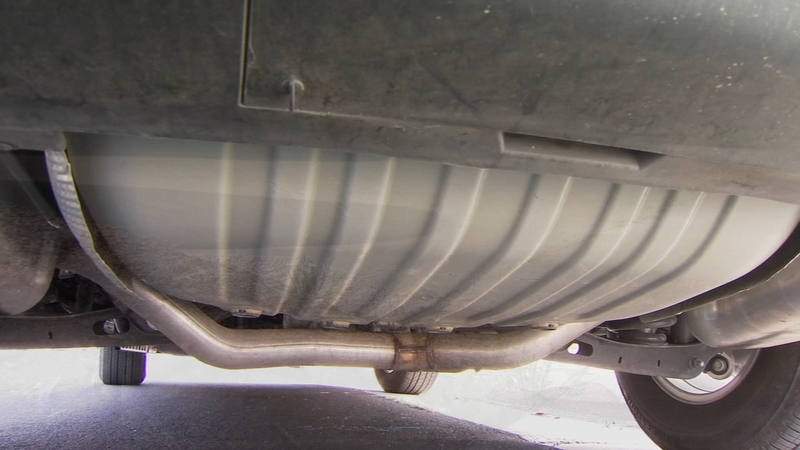 CLOVIS, Calif. (KFSN) -- Police have arrested a 24-year-old man accused of stealing gas from a vehicle in Clovis on Friday morning.

A Clovis man caught the crime happening in his own driveway near Barstow and Temperance around 8 am Friday.

Police say the suspect drilled through his gas tank to steal about 10 gallons of gas before taking off.

"As the suspect was running to his own vehicle, he did somehow apologize to the victim as he sped away," says Ty Wood with the Clovis Police Department.

But with or without an apology, he caused potentially thousands of dollars in damage to steal about $55 worth of gas. Police were called immediately.

"Fortunately, the victim got on his phone quickly and was able to provide a really good description of the suspect and his vehicle," Wood said.

That helped Clovis PD catch up with the alleged criminal quickly -- 24-year-old Hector Gongora. He was arrested just a mile away at Barstow and Fowler.

Ron Benton lives next door and woke up to a text from his neighbor warning him about what happened.

"Neighbor here, unfortunately, had his gas taken and this neighbor here two different times," Benton said. "They were trying to steal his catalytic converter."

Ron says now, he isn't taking any chances with his own vehicles.

"I try to be proactive and prevent things by having a motion sensor, lights around, candles around, keep our vehicle in the garage," he said.

Clovis Police says, unfortunately, high gas prices will likely lead to more gas theft. They advise the best thing you can do to avoid being a victim is to park your car in the garage whenever possible.