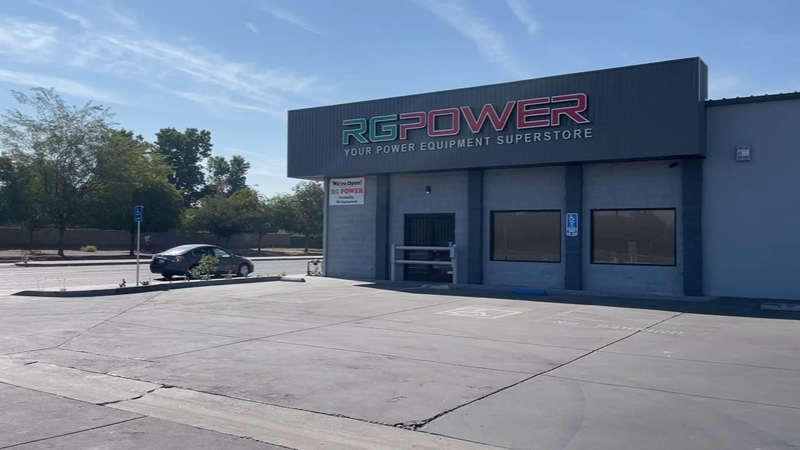 CLOVIS, Calif. (KFSN) -- One local man had the opportunity of a lifetime to buy the store where he had been a customer for years. Now, he is expanding his business amid the pandemic, which means more job opportunities.

Twenty-six years ago, Marcus Fierro would have never guessed he would be opening the doors to his business's brand new storefront location, RG Power in Clovis.

"I did not have any ambitions in getting into this market, this business," said Fierro.

Before getting here, this company was known as RG Equipment in a much smaller store where Fierro was once the customer for his landscaping business, Preferred Landscaping.

"The owner would kid around and say 'buy my company,' and I would say 'yeah, yeah.' Until one day he was very serious, and we sat down and made it happen," Fierro said.

That purchase happened five and a half years ago. Since then, Fierro and his business partner renamed the company.

About a month ago, he opened this nearly 15,000 square foot store where they continue catering to landscapers and expanded to markets like construction. He says the previous owners made this life-changing career transition simple.

"He and his wife made things so easy for me to make this transition to take this on, and I am glad they did. They set a strong foundation, and we've been able to grow on that," Fierro said.

Meanwhile, the landscaping business he launched over 20 years ago has continued and grown tremendously, now employing over 60 people.
Fierro says his hardworking parents taught him to dream big.

"Growing up, I worked in the fields, my mom and dad lived in tents, they were food pickers here in the Central Valley, and we just pushed through, pushed forward," he said.

One of his most significant accomplishments is knowing how many people he's been able to employ and help before and during the pandemic.

He says he values the hard work which keeps his businesses going.

"We've had a positive impact in their life, that working with me has changed their life, and there is no substitute for that," he said.

Fierro said they are currently hiring and look forward to more growth, in more ways, for years to come.