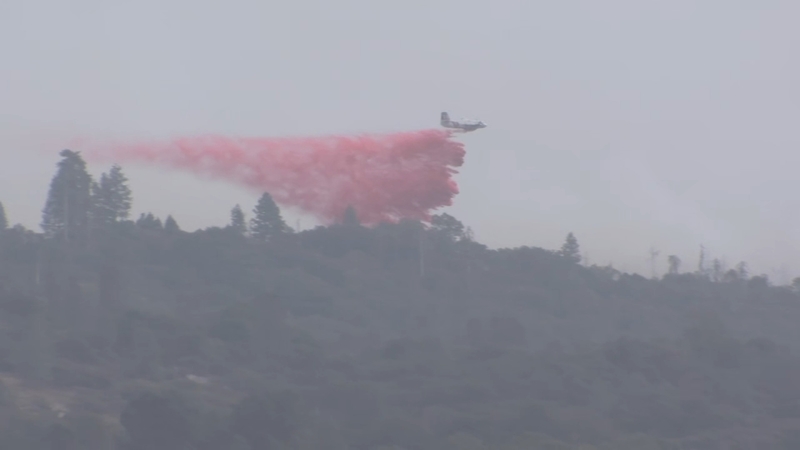 FRESNO, Calif. (KFSN) -- The midweek aerial attack on the Creek Fire helped crews on the ground protect property, but much of the plane activity we saw earlier has been limited the past two days.

"We were able to get in that afternoon some good drops on it but then towards the latter part of the day it kind of closed in on us and we had to shut everybody down," said DC-10 Pilot Kevin Hopf. His plane is contracted with Cal Fire.

Three other DC-10s with the company 10 Tanker Air Carrier contract with the federal government, but all four have dropped retardant on the Creek Fire.

These jumbo jets used to fly passengers, but now as tankers, they're a very large tool in the firefight. But they've been sidelined by the smoke.

Activity at the Fresno Air Attack Base, where many planes and choppers fill up on fuel and retardant, has slowed.

Hopf flew back to McClellan Air Force Base near Sacramento, where has he more landing room.

Right now he was just waiting for a call, whether it's for the Creek Fire or a wildfire in Oregon.

Hopf explained, "They do have spotters that go out ahead of us, air attack, and circle overhead and once they get the visibility required we get called in. We're hoping for a little bit of a breeze. Don't want the high winds by any means. Get some breeze in there and get some of this low-lying smoke out of the way."

Cal Fire helicopters had been busy dousing flames with water lifted out of Manzanita Lake. They've already made 72 trips and dropped over 218,000 gallons of water.