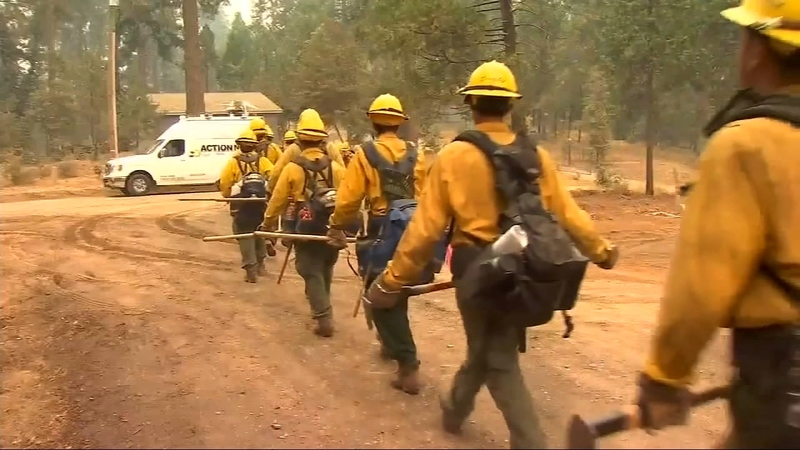 AHWAHNEE (KFSN) -- It's a day-by-day fight. The Ferguson Fire is spreading. It has even prompted historic closures of areas inside Yosemite.

Park Rangers still are not even sure when they will be able to reopen areas of the national park to visitors.

"I've seen a lot of fires and seen things, and nothing like this. The smoke is a good example. I've seen fires that have impacted the Valley over the years but I've never seen the level of smoke, but the sustained poor air quality," said Ranger Scott Gediman.

Firefighters are targeting their efforts on active fire near the Foresta and Yosemite West areas. With steep terrain still posing a challenge, crews are trying to make sure the fire stays between Wawona Road and Highway 120 in hopes of preventing flames from spreading further into the park.

But there's some improvement.

On Tuesday, Highway 140 from Mariposa to the park entrance reopened. Highway 120 also opened, but the road into Yosemite Valley remains closed.

Scott Gediman says they need to make sure the road is free from fire, as well as other hazards before they reopen.

"Looking at fire activity, impacts to the road. For example, you have trees falling across the road so it's all safety issues. One we can get fire subsided and allow safe travels, at that point we'll endeavor to open Yosemite Valley," said Gediman.

Dean Gould says the dead trees is a big reason for the spread of the fire. He says they need to start looking at ways on how to prevent massive wildfires likes these in the future.

"What are those areas that pose the greatest risk to communities and collab to get treatments in place based on that criterion rather than individual land managers trying to implement their own treatments," said U.S. Forest Service Dean Gould.