One of the messages inside Detention Billiards says those concerned over people not wearing a face mask should call the National Suicide Prevention Hotline.
KFSN
By Jason Oliveira 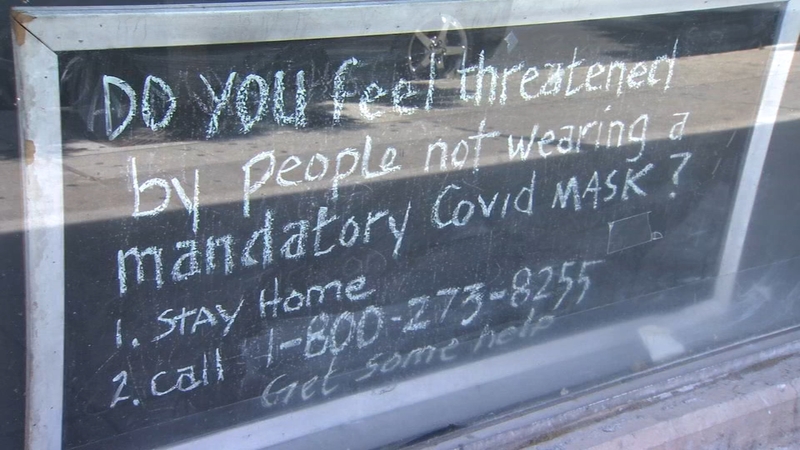 FRESNO, Calif. (KFSN) -- A local business owner is under fire after he wrote a few chalkboard messages prominently displayed inside his pool hall mocking the coronavirus and Governor Gavin Newsom.

But that hasn't stopped the popular pool hall from gaining some unwanted attention mostly from people online, saying they won't go back and how disappointed they are with the messages.

Owner Tim Ferrigan has used his time during the pandemic shutdown to express some of his feelings about the coronavirus and the governor's handling of the virus.

The thoughts are on multiple chalkboards that can be clearly seen by anyone walking by his business.

"There's a demographic of very sensitive people out there that are going to get upset about anything," Ferrigan tells Action News.

Some have chuckled at the signs while others say Ferrigan went too far.

That number is the National Suicide Prevention Hotline.

"Nobody has a sense of humor these days anymore, but it wasn't the number to the coroner's office. I was not promoting suicide," Ferrigan says.

Ferrigan says about that message: "I don't think anybody on earth can talk to this governor. He's an emperor and he's isolated to where I don't think he has any contact with reality and the real people."

Detention Billiards has been closed for about four months since the pandemic hit in mid-March. It was allowed to reopen for three weeks after Ferrigan spent more than $3,000 to obtain a restaurant license and get his facility COVID-19 compliant before he was shut down again by the state.

Despite the backlash he's received over the signs, Ferrigan says he will continue to write topical chalkboard messages in the future.