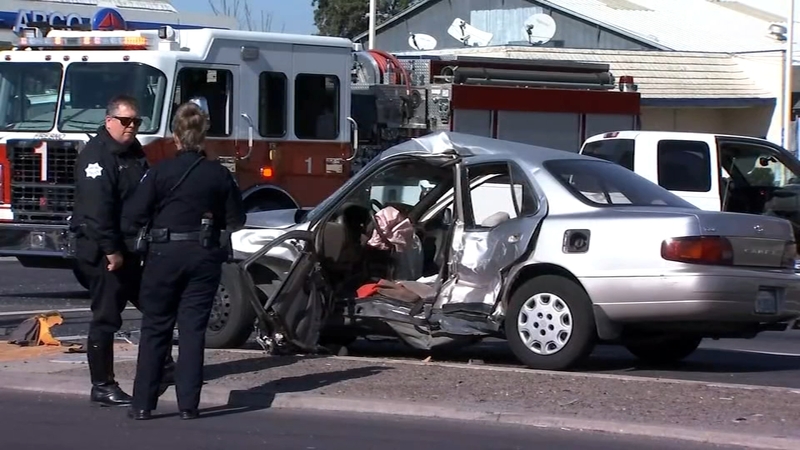 FRESNO, Calif. (KFSN) -- Fresno Police are investigating a crash in East Central Fresno that killed a man and critically injured a woman.

Investigators say the driver who ran a red light and caused the crash tried to get away, but two good samaritans chased him down.

Surveillance video from a nearby business caught the moment police say 29-year-old Daniel Phillips blew through a red light on Belmont Avenue Monday morning and crashed into a man and woman driving northbound on Maple Avenue.

It also shows, in the moments after, Phillips running away from the scene.

As workers walked out from a nearby tire shop to see what was going on, one of the employees, Jose Godinez, decided he had to try to catch the guy who took off.

"I knew it was a big crash because I seen, I heard, the wreck and just said 'Nah, this guy can't get away.' You know?" Godinez said.

Shortly after Godinez grabbed a ride down the street, Ray Rodriguez, who lives nearby, also came out to see what was going on and realized the suspect had run past him.

So, he hopped in his car and also gave chase.

"I just wanted to make sure if someone's dead that they got the guy, you know? That's it." Rodriguez said.

The two chased Phillips on to Highway 180, holding him down until law enforcement arrived.

The California Highway Patrol took Phillips into custody and he was taken to the hospital.

Investigators say it's still too early to say if he was under the influence of drugs or alcohol.

The man and woman who were in the vehicle that was hit were rushed to the hospital.

Officials say the man, only described as being in his 70s, did not survive.

The woman remains in critical condition.

Fresno Police say while they don't want people to ever put themselves in danger, they're grateful Godinez and Rodriguez were able to hold the suspect until officers arrived.

"We are very thankful that it happened, the partnership between our community and our officers is huge," said Fresno Police Dept. Sgt. Diana Trueba Vega

Godinez and Rodriguez say they're happy they were able to help and would both do it again.

"I got kids, you know, and I wouldn't like that if somebody hit my kids and get away like that, so I did what I did," Godinez said.

"This is like my good deed for the day, you know? I do something bad? This is my good deed."