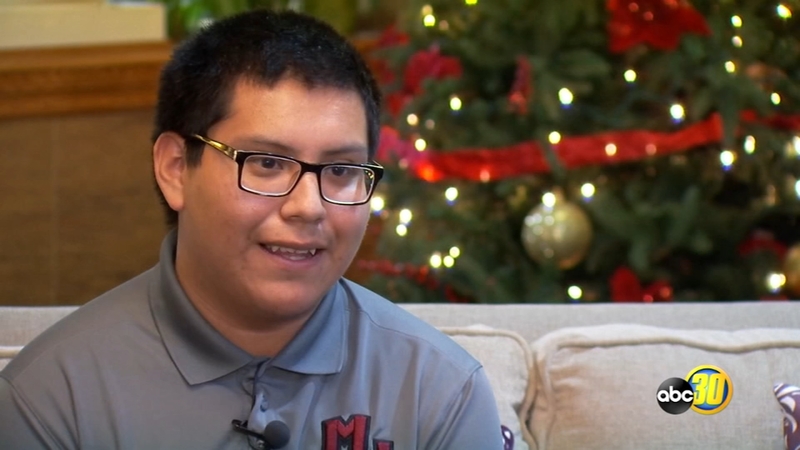 VISALIA, Calif. (KFSN) -- Several months after Alejandro Diaz completed his summer internship at Quail Park, a senior living facility in Visalia, he came back for a visit.

The Mt. Whitney High School junior caught up with some of the residents, told them about the classes he's taking this year, and helped them hang ornaments on a Christmas tree.

"(He was) extremely shy and I thought, 'Oh my, is he going to be able to feel like he's part of things?' But you know, he stepped up," Sharp said.

Alejandro didn't have to go above and beyond at Quail Park, but he did.

He set up games, watered residents' flowers, and even washed their cars.

He'd lend them his ears, but also learned when it was time to give them space.

"He's very introspective, but a very thoughtful person," said Health Sciences Academy Lead Teacher Tim Perrotta. "So it really helped that his personality was able to blend with the residents who had a lot of stories to share with him, had a lot of things they could talk about that they found out they had in common."

"They really helped me understand who I am and why I like helping others," Diaz said. "Because I get really happy when they smile or they show they're really excited to see me-that just makes me feel better."

His father died in February, and he became depressed.

But at Quail Park, some of that pain began to fade away.

He immersed himself in the internship, and even opened up about his loss.

"Once I told some of them, they understood how it feels to lose someone," Diaz said.

"After I had a chance to visit with him over the summer and monitor his participation, what he was doing at Quail Park, I saw a huge change in his attitude," Perrotta said. "His spirits were lifted. I think it provided him with a sort of closure that he needed."

This fall, Perrotta nominated Alejandro for Tulare County Office of Education's Kids of Character, in the category of Caring.

Out of six finalists, Alejandro was the top honoree.

"I didn't think I did anything special and I found out when I was walking into his class, after lunch," Diaz said. "I was just walking normally, and I wasn't really expecting much, and he came up to me and told me that I won. I was so confused. I was asking questions like what just happened?"

Alejandro plans to be a certified nursing assistant by the time he graduates and hopes to be a registered nurse eventually.

This summer, he realized he could exceed his expectations and learned his fulfillment comes from helping other people.