Children First: Tulare school students learn what it means to have character 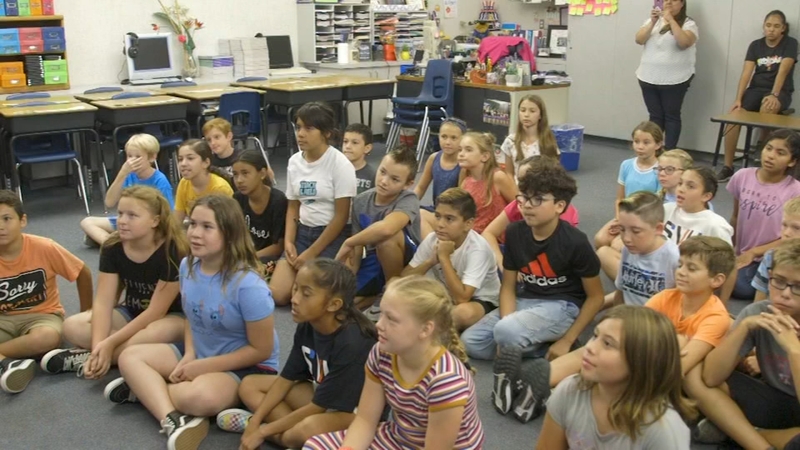 Children First: Tulare school students learn what it means to have character

FRESNO, Calif. (KFSN) -- Students at Sundale Union School in Tulare are having fun playing musical chairs with a different spin.

Sundale Leadership students are teaching younger kids about the importance of inclusion as they share their favorite color, food or games.

"Like show them the respect they need to have for their other classmates and show them what they have in common and how then how you can make friends in the craziest ways," said eighth-grader Samantha Cloutier.

Maxwell Benson came up with the idea of going class to class to show younger students teambuilding techniques.

"I want to make everything where there is not as much put down but there is pick up," Maxwell said.

A twist on rock, paper scissors had students working together.

"There's some kids you don't really hang out with but in the game, you still have to like face against them and you have to link together in one huge line with them," said fifth-grader Brylee Wolsey.

Early lessons on character are part of the school's culture.

Tulare County Office of Education has used the Character Counts program in Tulare County for 24 years, longer than any other county in the United States.

"Character education isn't a piece of the plate, it is the plate," said Character Counts coordinator Kelley Petty.

Key standards that will serve students as they move into the working world.

"A lot of people in the industry will say you know what I'll hire for character and I'll train for competence," Petty said. "How can you think about being a person of integrity if you don't have kindness as a foundation?

Sundale students are leading by example.

"It can be used anywhere, it's not only on a school campus or at home it's anywhere it's as simple as saying hi to someone or giving the homeless change or food it's simple acts of kindness," said eighth-grader Clarissa Diaz.

"Our bully committee's message is basically it's not OK. If you see something that is not OK just go up and tell that person or tell a teacher. You don't have to be the one being bulled to take action," said Sundale leadership teacher Kim Tyler.

"Be kind if you see someone alone go sit next to them, talk to them even if you're just walking to your next class say hi to someone, pick them up, don't put them down," Maxwell said.

With these young leaders paving the way, kids cash in on stickers and leave with lessons that will hopefully stick as they get older.

"I learned it takes it takes everybody just even though it ended up in one line everybody was still a winner," Brylee said.

"We wanted them to get the message and that's exactly what happened," Clarissa said.
Report a correction or typo
Related topics:
educationchildren firsttulareschool
Sponsored Content
Copyright © 2021 KFSN-TV. All Rights Reserved.