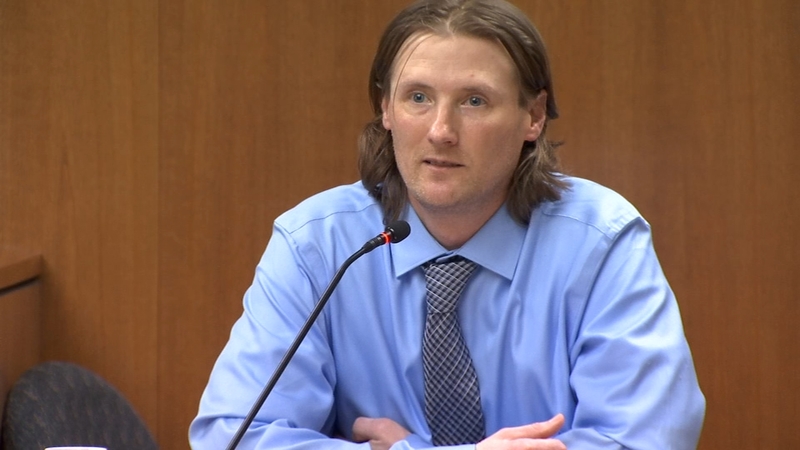 Eric Smith has pleaded not guilty to the murder of Anthony Romero saying the stabbing was done in self-defense.

"When I was back against a table, I saw Anthony come and swing at me again and he got me in the temple. That was at the same time I grabbed the knife," said Smith.

Smith's defense team has said all along that he was at the home with a woman when her boyfriend Romero showed up and initiated the violence.

Jurors also heard the first interview from the only witness to the deadly stabbing of Romero.

A Fresno County Sheriff's detective delivered the outcome during a field interview with the woman who said she had just broken up with Romero two days before the murder.

But the day of the deadly confrontation, she said Romero started messaging her on Facebook and wanted to talk.

So he showed up at her house.

The man on trial for murder, Eric Smith was also there.

The female witness took the stand previously and opened up much more than her initial conversation with detectives.

Right after the homicide, she denied any of the people involved used drugs.
But she did say Smith drank some Jim Beam whiskey that day but not enough to be intoxicated.

Deputy George Razo searched the defendants truck, to find a sheath with throwing knives. Then he looked through the garage- and found other knives.

The female witness said she wasn't involved in a romantic relationship with Smith, but said he liked her.

She assumes it may have bothered Romero that his one-time friend was there with her.

As far as the actual homicide, she claimed to have only seen a scuffle between the suspect and victim and then the bloody aftermath.

The defense attorney hired to represent Smith says there's no deliberation or premeditation involved in the crime. But prosecutors say the defendant was obsessed with the female at the center of the case. She also says Smith was jealous and wanted Romero to leave her alone. Deputies say all three were methamphetamine users.

Testimony will continue next week.