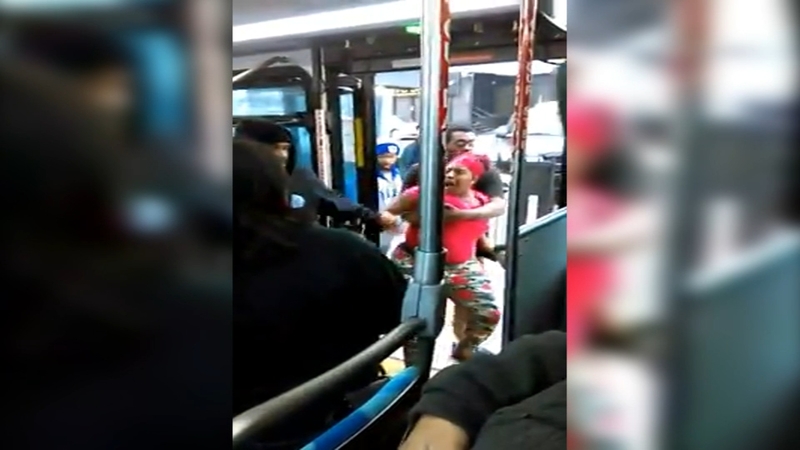 FRESNO, Calif. (KFSN) -- A fight on a FAX bus is now raising safety concerns for a lot of riders.

Dozens of riders packed the bus out of downtown Fresno on Tuesday afternoon and some jostling led to the fight.

Curse words and the flailing punches that followed frightened just about everyone on the bus stopped at Belmont and Abby.

"There were so many kids there screaming at the top of their lungs," said Amber Ocana Hernandez. "And so many kids who could've gotten hurt besides that one that was trampled."

Curse words and the flailing punches that followed frightened just about everyone on a FAX bus stopped at Belmont and Abby on Tuesday.

Fresno police got a few 911 calls from the bus, including one from the driver who stepped away to make his call.

Police saw the video and talked to the combatants, but didn't arrest anyone or issue citations.

"Although a pretty good battery and disturbance occurred on the bus, no one was willing to press criminal charges at that point," Lt. Rowe said.

Officers decided any crimes were misdemeanors and without a victim to press charges, they didn't have a case.

But several legal analysts say the attack itself could be a felony assault.

And what followed could easily qualify as a felony criminal threat.

"We're in a big push for public transportation and here you have a potential assault and criminal threats on a public bus," said legal analyst Peter Kapetan. "I think it's bad public policy not to at least pursue something or at least look at it seriously because you're going to discourage people from riding the buses if they don't think they'll be safe on city buses."

Police say they haven't gotten video from inside the FAX bus yet, but they will, and they'll eventually send the case to the district attorney's office to see if they want to file a felony case.