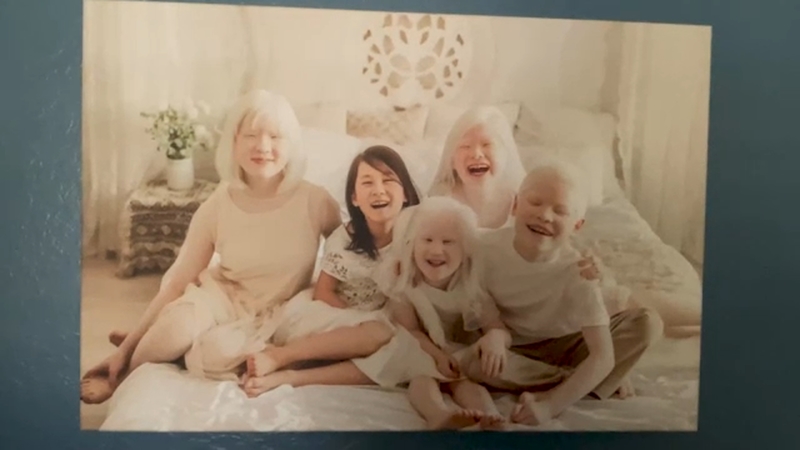 The Fresno couple stars in a new reality special on TLC called "Born With Albinism," which follows their day-to-day lives with their five adopted children from China.

"Born With Albinism" premiered last month and like most reality shows centered around families on the network, the Grabowski's have a unique story to tell.

Four of their adopted kids have Albinism -- a rare genetic disorder that causes the skin, hair and eyes to have little or no color.

Mae does not have Albinism like her siblings but she does, however, deal with challenges due to nerve damage in her arm.

"We go on bike rides, we go down streets and hiking and it sounds strange, but it all works out and they're able to do it," Jon said. "I think we just learned there's a lot of accommodations made that you can do a lot of stuff."

TLC showcases the everyday challenges the Grabowski's face. Three of the kiddos are legally blind -- a common side effect of albinism -- and one has mental development delays.

"One of the reasons we did the show was to educate people and present the fact that disabilities don't define you," Liz said. "And that you can overcome and set out everything that you want to do."

Because their skin is so sensitive to light, the family has learned how to adapt and manage the challenges they face.

Liz home-schools the kids but always finds time to take them outdoors, and that means using plenty of sunscreen. The Grabowksi's say they buy it by the gallon.

"You want to be protected from the sun so we wear hats, we wear glasses, we put on sunscreen," Jon said. "Probably everybody should wear sunscreen based on what we know. It's just become the normal process for us."

But as far as how the family was portrayed on TV -- the kids gave it mixed reviews.

Jon and Liz have no plans to adopt another child but they do say never say never.