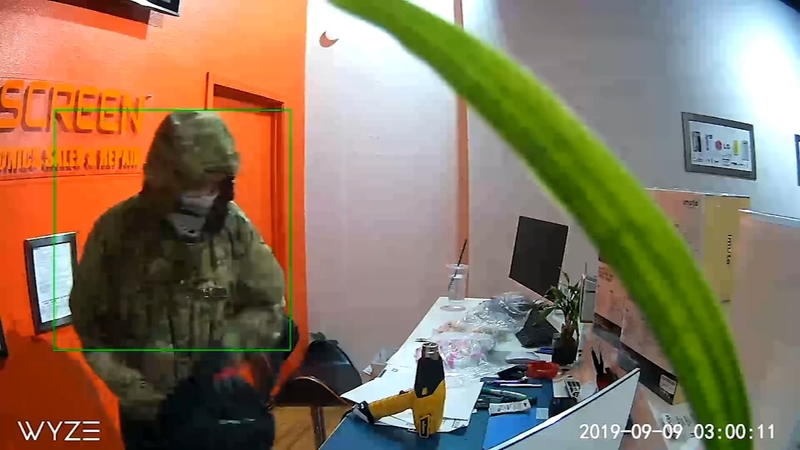 FRESNO, Calif. (KFSN) -- He was quick, he was bold and he was on a mission to steal.

The camouflage-wearing burglar was captured on surveillance cameras inside EZ Screen Cell Phone and Tablet Repair in northeast Fresno around 3 a.m. Monday.

The crook is seen swiping phones, products, tablets, all totaling more than 500 dollars.

But owner Adam Barthold said there is one item the thief snuck off with that can't be replaced.

"He also got away with my grandpa's watch it's not very expensive but it's very important to me and it's a silver watch with some gold trim," Barthold said.

In addition to boarding up his front door, Barthold was left with a list of customers he had to call because their items were taken.

"Their response was very understanding, hard for you to make that call because I don't let customers down," he said.

However, at that moment he felt like he did.

Now Barthold needs your help identifying the sneaky thief who couldn't sneak away from the camera that caught a glimpse of his face.

Barthold said he thinks the suspect was a customer.

"Because the way he moved he went straight for my phone he knew he'd have to cut them," he said. "He probably came here and saw what he liked."

While that bothers the 27-year-old business owner, it's not enough to stop him from saying this to the person who took advantage of him in one of the worst ways.

The owner says he is increasing security by upgrading his alarm system and surveillance cameras to try to prevent this from happening again.

Video of an SUV that was seen leaving shortly after the burglary was given to Action News. The vehicle appears to be an older model Toyota 4-Runner.