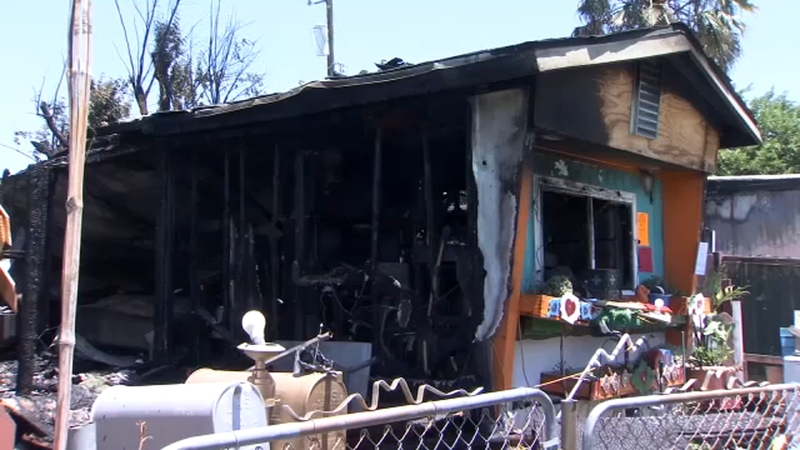 FRESNO, Calif. (KFSN) -- The Fresno City Council has agreed to take over for the state when it comes to code enforcement at mobile home parks within the City of Fresno.

This action comes less than 24 hours after a fire destroyed three homes at a mobile home park with a suspended permit.

"I was watching TV and then I heard a bunch of popping noises, all the circuits were popping and I came outside and there was a big 'ol fire," said Salvador Rodriguez Jr.

He lives at the Trails End Mobile Home Park on Sierra Ave. near Blackstone Ave.

Rodriguez Jr. and his family were going through what's left of their home Thursday afternoon.

It was one of the mobile homes destroyed Wednesday evening.

“This location is a problem for the city,” said @FresnoFire Chief Donnis as she thanked @MayorJerryDyer and the city council for bringing forward this ordinance. @ABC30 pic.twitter.com/ewt38OFFv0

"This location is a problem for our city," said Fresno Fire Chief Kerri Donis.

Donis said access issues and a large amount of combustibles makes the location dangerous for firefighters and people who live there.

The cause of Wednesday's fire is still under investigation, but Donis said it may have been electrical.

Donis said within the last year, they have been called out to the mobile home park 10 times.

"Two of those resulted in fires, one with a tragic loss of life," Donis said.

In April, 56-year-old Ron Richardson died in a fire there.

The California Housing and Community Development (HCD) suspended the park's permit in January because of unsanitary and substandard conditions.

It will soon give the City of Fresno full control of all code enforcement duties related to mobile home parks, instead of the HCD.

"I have a message for the residents of Trails End: Help is on the way," Bredefeld said.

Bredefeld said the moment the city receives approval from the HCD, they will be sending in code enforcement officers to ensure the park is safe for residents.

HCD officials said, as of Thursday, they have finally exhausted all enforcement capabilities and posted a notice to abate.

HCD officials say they issued a final notice to abate at Trails End Mobile Home Park today. It must be in compliance by June 26th or HCD can call on Fresno Code Enforcement to move in and take action. @ABC30 pic.twitter.com/fZtaUcHI8r

Mayor Dyer said they will be working with the HCD until the city takes over responsibility.

"We cannot afford another fire at the trails end mobile home park or any other mobile home in this city," said Dyer.

The mobile home park has until June 26 to make the corrections required by the HCD. If they don't, the HCD said it will be calling the City of Fresno to have code enforcement move in.