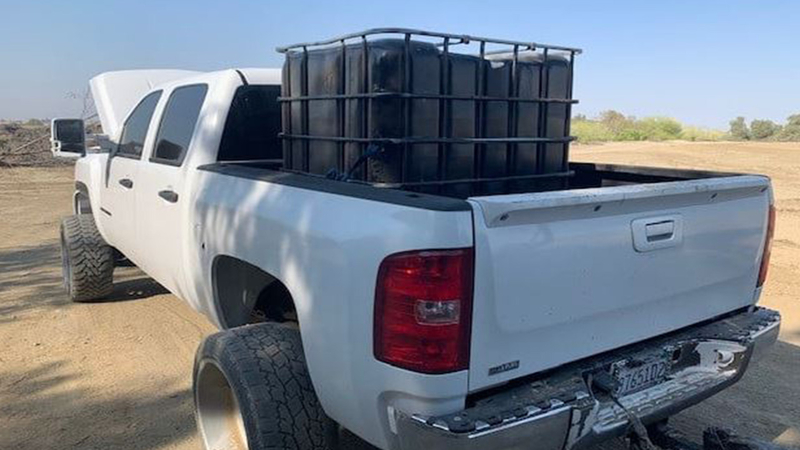 FRESNO COUNTY, Calif. (KFSN) -- A 38-year-old Lemoore man has been arrested for stealing thousands of gallons of fuel from farming equipment in western Fresno County and selling it illegally.

Sheriff's officials say he painted the containers black to conceal the red-dye diesel used in the off-road vehicles to divert suspicion while hauling them in the bed of his pickup truck or ATV.

Officials say Martinez-Barajas would sell the stolen fuel to truckers at half the price.

On Wednesday morning, detectives with the Fresno County Sheriff's Office Ag Task Force tried to pull over Martinez-Barajas in Coalinga, but he sped away.

Deputies tracked down the suspect's truck, which had been abandoned. Several teams from the sheriff's office helped search for Martinez-Barajas, and eventually found him under trees in a dry riverbed.

Martinez-Barajas surrendered, and investigators recovered the stolen items and an AR-15 rifle with no serial numbers.

Detectives had seen an uptick in reports of stolen fuel during August and September, but they believe Martinez-Barajas was stealing around 800 gallons of fuel per week over the last six months, which costs about $60,000.

He was booked into the Fresno County jail on various charges, including grand theft, evading police, illegal possession of a firearm, possession of armor-piercing ammunition.

Officials say he also had an active warrant out for his arrest in connection to a domestic battery case.