KFSN
By Jason Oliveira
CLOVIS, Calif. (KFSN) -- Clovis police detectives arrested the suspect accused of brutally assaulting a man over a parking spot at The Home Depot earlier this week.

Officials say 63-year-old John Bell of Fresno has been booked into the Fresno County jail and faces felony battery and threat charges.

Clovis Police Detectives have made an arrest in this case! The suspect, 63 year-old John Bell of Fresno, has been booked into the Fresno County Jail for felony battery and threats...(1 of 2) https://t.co/evN4oDFjDA pic.twitter.com/JhFcnaostB

"They said my nose is broken, and my left cheek is fractured, and I have some kind of tear underneath my eye."

The 68-year-old victim had just finished shopping with his wife at The Home Depot and was ready to pull out of the parking lot when he became the victim of a brutal attack.

Joe Carrera, 68, said he was trying to back out of a handicap stall when the man driving a Ford F-150 behind him became impatient.

"I got off to talk to the guy in his truck, and he says move your car, but I can't you got to move your truck back. So once I told him that he got upset and he started flipping me off," the retired correctional officer said.

That's when Carrera says the dispute escalated to physical violence.

"Before I know it, I see him lunging at me, and he struck me with both fists. I didn't have a chance to defend myself or anything," he said.

The altercation did not stop there, the grandfather of five says just as he was regaining his senses, the suspect came after him a second time, leaving him bloody and bruised.

The man, police now identify as Bell, stopped and drove away, but not before he made one last threat.

"Before he got into his vehicle, he told me, 'the next time I'm going to kill you,'" Carrera said.

The suspect's silver F-150 was caught on camera. Saturday, police detectives made an arrest.

The video above is from an earlier broadcast.
Report a correction or typo
Related topics:
cloviscloviscrimeattackparkingbatteryroad rage
Copyright © 2020 KFSN-TV. All Rights Reserved.
ATTACK 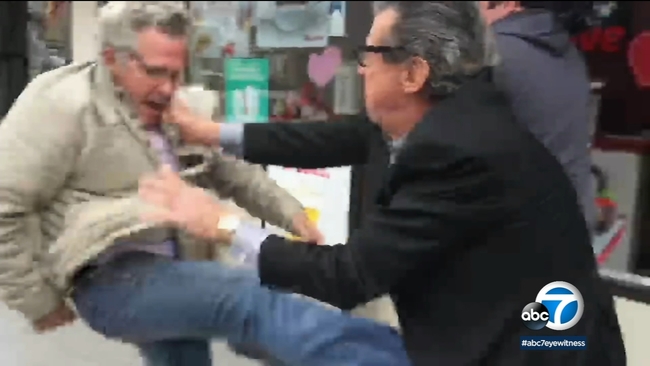