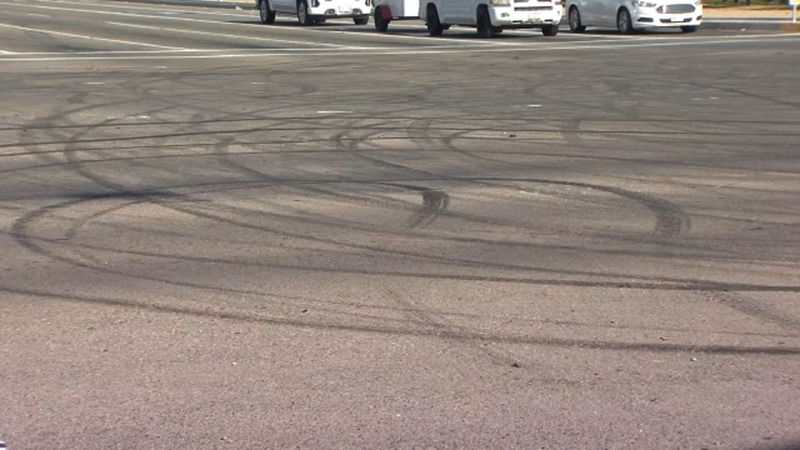 FRESNO, Calif. (KFSN) -- Danger developed on Fresno streets this weekend when car sideshows and dozens of people shut down intersections throughout Saturday night and into Sunday morning.

Police got dozens of 911 calls about the illegal street shows and spent a long night trying to break them up.

Almost an inch of melted tire rubber on the road and dozens of black marks throughout the intersection of Willow & Shepherd hints at how dangerous the night was here.

For Fresno police, the intersection where Fresno and Clovis meet was one of several spots where reports came in late Saturday and early Sunday about sideshows or street racing.

"Throughout the evening, we moved them or chased them from location to location - five or six different places," said Lt. Bill Dooley of the Fresno Police Department.

Clovis police came and sounded their sirens, but the crowd didn't disperse quickly.

They set off fireworks before slowly leaving for another location.

Neither Clovis nor Fresno police made any arrests, but the Fresno traffic unit is reviewing videos found on social media.

Fresno City Councilmember Garry Bredefeld says there should be consequences.

"What I saw was lawlessness," Bredefeld said. "We're not going to tolerate that in Fresno."

Lt. Dooley says this type of sideshow isn't common, but it's not rare either, so investigators have a playbook.

In the past, they've used video to find suspects, then issued warrants to gather more evidence and make arrests.

Dooley says they're working quickly because investigators are concerned about the sideshows escalating.

"We're lucky we didn't have anybody seriously injured," he said. "You can see people having to jump out of the way as the cars are spinning."