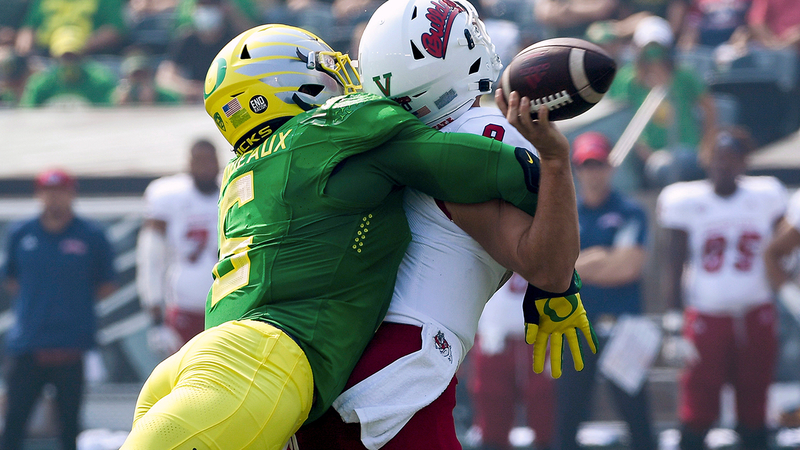 Kayvon Thibodeaux made his presence felt early in the first quarter. The potential #1 overall pick in the NFL Draft hit Haener on his blind side to force a fumble that was recovered at FS' 3 yard line. Three plays later CJ Verdell ran in the first score of the game to make it 7-0 Ducks.

It was another fumble to start the Dogs next drive, this time from Ronnie Rivers that again led to a Ducks TD 3 plays later to quickly put FS in an early 14-0 hole.

Another takeaway by the D ➡ another TD for Oregon, this time a four-yard score for Travis Dye.#GoDucks | @Babydye23

But then the defense settled in forcing two punts that led to two field goals from Abraham Montano (from 33 & 39 yards). After a quick 32 yard strike from Anthony Brown to Johnny Johnson III made it 21-6 Oregon, FS answered with a quick drive of its own. Haener led a 10 play, 75 yard drive in just 1:09 that was capped with a 17 yard touchdown to Parlier native Jalen Cropper.

HUGE touchdown before the break. It's a one score game despite two early turnovers.
Haener 20/29 220 yards, TD and has connected with 9 different receivers. @ABC30 https://t.co/xNV0r23YbE

After the defense forced turnover on downs, the FS offense started the second half at its own 14 yard line trailing by one score. On third and 2, Jordan Mimms broke free for a 45 yard run, the Dogs biggest play from scrimmage.

Sure there is a sea of green but the Red Wave who traveled are loud and proud! There defensive cheers have been over powering the whole stadium 👏🏻 @FSAthletics @ABC30 pic.twitter.com/2Us3oT2e2X

4 plays later Haener ran in a QB keeper and after he connected with Juan Rodriguez for a 2 point conversion the game was tied at 21.

IT'S A DOG FIGHT.

The first play of the fourth quarter, Arron Mosby forced a fumble by hitting the ball out of Brown's hands and Kevin Atkins fell on it to give FS the ball at Oregon's 27. Montano hit a 22 yard field goal to give FS its first lead of the game 24-21 with 13:03 to play in the fourth.

A fourth FS fumble, and second from Haener, gave Oregon the ball at FS' 27 yard line. A 25 yard field goal from Camden Lewis again tied the game at 24. Later, on fourth and 2, Oregon elected to go for it instead of kicking a 47 yard field goal and Brown ran in a 30 yard touchdown to make it 31-24 Ducks with 2:57 to play.

On fourth and 15, the Dogs came up a yard short of the first down giving Oregon the ball with 2:19 to play.