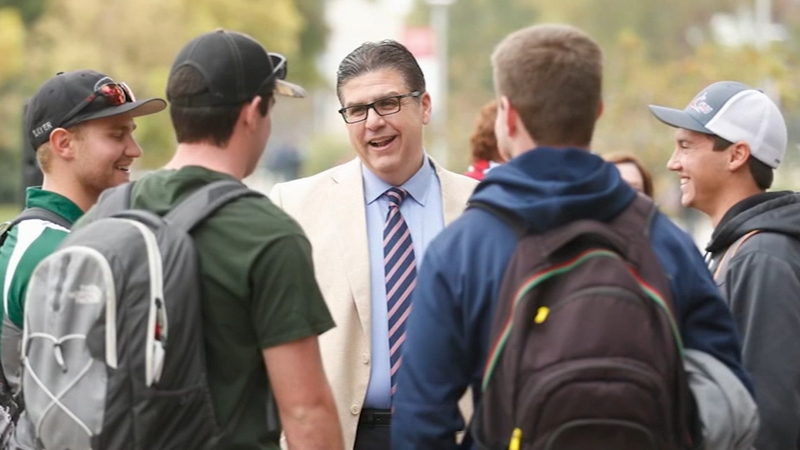 FRESNO, Calif. (KFSN) -- When Doctor Joseph Castro took the helm as president of Fresno State in 2013, it was a homecoming. Castro grew up in Hanford, the grandson of Mexican immigrants. He felt the job was an opportunity to serve a community he knew well, and students with whom he shared a similar background.

"It's really the reason why I entered the field of higher education. As a first-generation college student myself, I experienced that powerful transformation that a university can have on an individual and family and whole community. And that's what inspired me to go into higher education and inspires me to want to lead in this area," Castro says.

His leadership and impact have been seen and felt in various ways throughout the campus in the last seven years, including the massive job of rebuilding the electrical infrastructure for the campus. The visible changes include the completion of the Jordan Ag Research Center, the first of its kind in the CSU system, and the long-awaited opening of the Campus Pointe shopping center in 2015.

Also, the Armenian Genocide monument is the only one like it in the country on a university campus.

Construction is set to restart soon on the new student union.

"I think it's going to transform the entire experience for our students. About 70% of our students are first-generation college students. And this building will be the first place that many of them visit with their families," he says.

Doctor Castro's plan for the university also included increasing enrollment, graduation rates, diversity, and stature. He achieved those goals - with Fresno State now repeatedly ranked among the top schools in the country.

"I think I'm most proud of the fact that it's clear to anybody who's part of Fresno State now or in the community, that we're a university that really cares about our students and we're focused on students' success. I think there's that collective commitment that I didn't quite see seven years ago that I see today."

His commitment to student success and academic achievement is something he shares with his wife, Mary, and it's led to programs including the Student Cupboard, Project Hope, and the Clothing Closet - all created to help students experiencing hardships.

"I feel confident that some of that progress on graduation rates can be attributed to our work with the cupboard and the clothing closet and lots of other initiatives around housing security. We've really leaned into those issues. And I'm proud that we lead the nation. Because when we started that program, there were very few examples like that around the country," he says.

The coronavirus crisis has made the last several months of Doctor Castro's tenure at Fresno State his most difficult. The pandemic forced the majority of students online, a pivot that required immediate restructuring of courses and services.

"We set up so many support structures here on campus for our talented students and we've not been able to use them in the traditional way during COVID so we've had to be extraordinarily creative and putting all of our services and support virtually."

Thinking 'big' and creatively despite the challenges is part of the 'be bold' attitude he has encouraged in both students and staff since he arrived at Fresno State.

"Growing up in the Valley, sometimes people underestimate us. They think that we're less than, and I wanted our students to know - 'You are not less than. You have the same big dreams that everyone else can have, that talent exists in every household and we're going to do everything we can to make sure that you shine'."

Doctor Castro is not saying goodbye. Even as chancellor he plans to continue connecting with students through social media, addressing questions, concerns - even criticism, because he wants students to know they have his ear, and he's got their back.

"I want to urge all of our Fresno State students to continue being bold. I know that it's been difficult. And I want to urge them to stay focused on their higher education and their big dreams and I'm going to do everything I can as the Chancellor of the CSU to support them," he says.
Report a correction or typo
Related topics:
educationfresnofresno state
Copyright © 2021 KFSN-TV. All Rights Reserved.
FRESNO STATE
CSU to require all students, staff to get COVID-19 vaccine
Fresno State program teaches how to encounter cultural differences
Bulldog Breakdown: Interview with Kalen DeBoer
Valley colleges report hits to enrollment and revenue from COVID-19
TOP STORIES
Police investigating deadly shooting in southeast Fresno
1 killed, 1 injured in Fresno County homicide
Mudslides force more than 100 to spend night on highway
Woman hit and killed on Highway 99 in Fresno area
Federal eviction ban expires after Biden, Congress fail to extend it
Pedestrian hit and killed on Madera roadway
LIST: Companies requiring COVID vaccines for employees
Show More
Pet food company announces voluntary recall
Fresno bars set to require proof of vaccination or negative COVID test
Family pleads for help finding hit-and-run driver in central Fresno
New details emerge in arrest of 2 Livingston police officers
CUSD parents given option to fill out forms for children and masks
More TOP STORIES News