The incident forced the California Highway Patrol to close a short but heavily traveled section of Central Avenue for hours.
KFSN 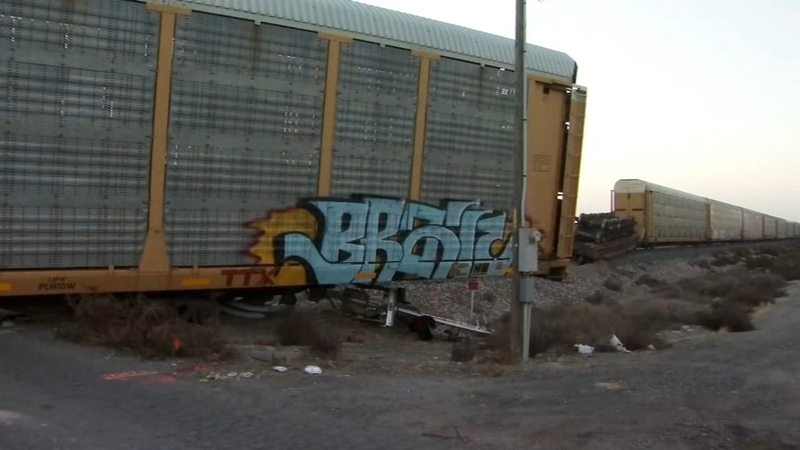 FRESNO, Calif. (KFSN) -- Authorities are investigating after a train derailed south of Fresno on Thursday morning.

Fourteen train cars on an 85-car train came off the BNSF Railway tracks that cross Central Avenue between Maple and Cedar Avenues, west of Highway 99, at about 5 am.

One of the derailed cars was carrying railroad wheels.

The other 13 were empty.

The cars remained upright and off the tracks. No one was injured.

Officials say the train was coming from Richmond, California and headed to Barstow, California.

Authorities say they have a workaround route, so train traffic will continue.

Lots of heavy equipment was brought in to help crews clean up the derailment.

The incident forced the California Highway Patrol to close a short but heavily traveled section of Central Avenue for hours.

A portion of Malaga Avenue, where Louis Raco lives, was also closed to traffic.

"Ordinarily we don't have too many problems here so this was surprising to me," Raco said.

Raco says she was up at 5 a.m. when the cars derailed, but didn't hear anything.

Eventually she looked outside and saw the intersection was blocked by a train.

"I kept looking out there as it got daylight, I could see this car with blinking lights and I thought something's not right," she said.

Last week, a train derailed on a Union Pacific Line near Goshen, spilling a few gallons of hydrochloric acid.

Officials haven't said how much damage was done to the cars or tracks, but they can confirm there were no injuries.

"Just good that no one got hurt," Raco said. "That's the main thing."