KFSN
FRESNO, Calif. (KFSN) -- In his state of the state address, Governor Gavin Newsom acknowledged plans for the vast High-Speed Rail system have stalled, but not in the Central Valley.

"However, we do have the capacity to complete a High-Speed Rail link from Merced to Bakersfield. I know some critics will say its a train to nowhere, I think that's wrong and I think that's offensive. People of the Central Valley endure the worst air pollution in America and some of the longest commutes, in this state and they have suffered too many years of neglect from policymakers here in Sacramento, they deserve better, and a High-Speed Rail project can be part of that," Gov. Newsom said in Tuesday's address.

High-Speed Rail supporters were encouraged to hear the governor say the $3 billion allocated for the construction project in the Central Valley will be spent and the thousands of jobs they've created will continue.

"So completing the Central Valley segment which is the only segment where the train will be traveling 210, 220 miles an hour, it makes sense that he puts all his resources there, all the attention of his administration there, so that it gets done in a timely manner. No, I think it's a very good move by the governor," said former Fresno County Supervisor Henry Perea.

Perea says nothing has changed.

Lee Ann Eager of the Fresno County Economic Development Corporation has been touting the business benefits of connecting Fresno to the Bay Area. She said she was initially concerned about the direction of the governor's speech.

"When he first started talking I was a little bit worried, but certainly, as you listened to the state of the state, his opinion has not changed," Eager said.

But she remains optimistic.

"He still supports the project we will just have to do it in pieces and make sure that right now we have enough to go from Bakersfield to Merced and when we get that done we get enough to go from Merced to the Silicon Valley," she said.

Assembly Member Jim Patterson has been a fierce critic of the project and predicted it would never be completed.

In a statement, he said, "Central Valley rail supporters and skeptics, must band together to make sure we are left with a functional track. After tearing up prime Ag land and ripping up the heart of our cities, we must ensure that we aren't left with the unfinished scraps of a failed project."

Now the governor predicted the rail project would be completed, but he wants to focus on the first segment and work to get additional federal and private funding, which supporters say was the plan all along.
Report a correction or typo
Related topics:
politicsfresno downtowngavin newsomstate of the statecentral valleyhigh speed rail
Copyright © 2021 KFSN-TV. All Rights Reserved.
HIGH SPEED RAIL 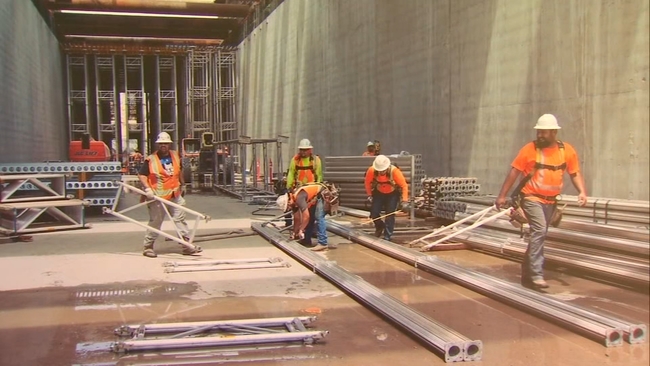