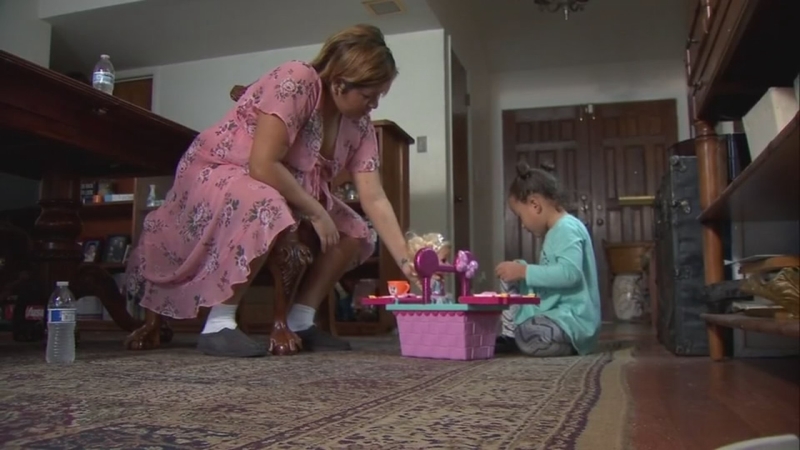 FRESNO, Calif. (KFSN) -- Marcelia Vidal and her daughter Angelina were traveling on Highway 99, getting ready to move back to Sacramento for a fresh start.

They say those plans are now on hold thanks to a frightening bus ride. It has been just eight days since Vidal was stabbed while trying to save her daughter's life.

Separated from her 3-year-old, Angelina, for almost a week while in recovery, Vidal says now that they are reunited. She's focused on the future.

"Its tough to get over sometimes but I have to I'm trying to move on not to think about it," said Vidal.

Though she and her daughter bare scars from a terrifying ordeal on board a Greyhound bus. They are thankful they are alive to tell the story.

RELATED: Man who intervenes to stop the stabbing of a woman and her toddler on Greyhound bus describes the attack

It was March 5th when they boarded a Greyhound bus from Las Vegas to the Bay Area. While stopped in Bakersfield, a woman acting delusional boarded--later identified as suspect Teresa Madrigal.

"She was being really loud," said Vidal.

Per witness statements, the Greyhound bus driver escorted her off the bus for a short time.

Vidal does not know what was said but when the driver let her back on, Madrigal moved her belongings from the front of the bus to the back and sat behind 3-year-old Angelina.

"I didn't know he was going to let her back on the bus. I thought she was talking to someone else and then I look behind me and she was just talking to herself," said Vidal.

Shortly after that behavior turned violent. Madrigal allegedly grabbed Angelina by the throat and held her at knifepoint.

"What I told her was, "Please please don't kill my daughter.' You know that's my baby you know. And then she told me to, 'Stay still. I'm going to kill you,'" said Vidal.

Vidal says when the suspect moved the knife toward her baby's head that is when she made her move.

"I stood up and grabbed her as hard as I could towards me and that's when she started with this hand the knife she just started jabbing me," said Vidal.

Marcelia was stabbed three times in the abdomen.

Before passing out Vidal ordered her daughter to run to the front of the bus where a passenger, Tanya Wright held her till they got to safety.

"She held her like it was her own daughter and protected her," said Vidal.

She thanks the passengers on the bus including Nathan Wanhala, Spencer Williams and Andrew Smith for stepping in.

Not only did they help disarm and subdue Madrigal but they prevented Vidal from bleeding out by applying pressure to her stab wounds.

"He's like it's okay you're going to be okay," said Vidal.

Vidal says the pain was so excruciating she thought she would die.

"But me getting stabbed it was worth it because, you know, I want to save my daughter," said Vidal.