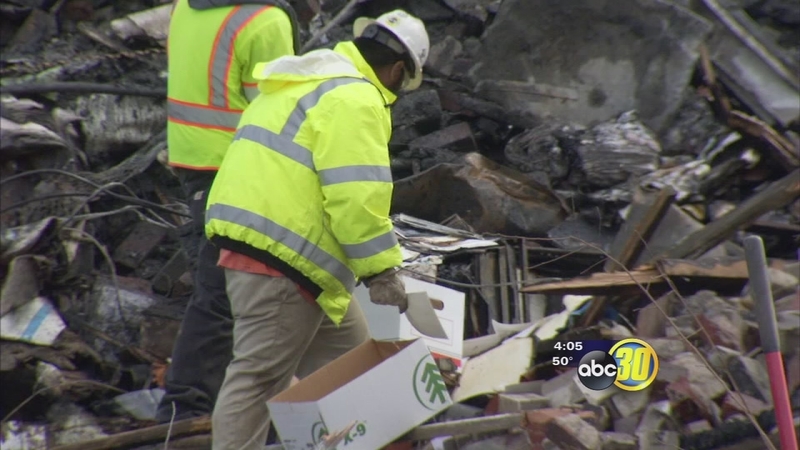 FRESNO, Calif. (KFSN) -- The investigation into what caused a historic downtown Fresno home to go up in flames is now underway. Flames shot up into the sky Monday night as a crowd gathered in shock watching the beautiful structure burn.

Firefighters worked through the night and into this morning to put out hot spots. But by the midday hours the reaming part of the structure came down and pieces of Fresno history were uncovered. Neighbors and firefighters could only watch Monday evening as a one of a kind home in the heart of Fresno went up in flames. "And on this fire, I understand they had the fire up on the second floor that had gotten there from the basement, so there was little that we could have done at that point except stand back and protect the exposures," said Ken Meharmann, Fresno Fire Department.

The house on the coroner of Mariposa and S Street was built by Frank Rehorn in 1906. He was a well-known contractor at the time. Decades later the home was sold to saint john's cathedral which used it as a convent for nuns. After that in the late 70's the home was purchased by architects Allen Lew and William Patnaude. The two restored the home and turned it into an office. "When I came I was just handed a small group of photographs, about 20 or so, only of specific architectural buildings not of the house-- but most likely ones they worked on," said Ruth Lange, Fresno Historical Society.

Members of the Fresno Historical Society were on hand Tuesday morning to pick up those items. Among them were pictures, blueprints, and drawings of buildings Patnaude designed in the city Fresno.

Firefighters said the home was vacant for years but those items will be turned over to family members soon. "This is one of the jewels of historic buildings in this town. And it was on the national register as well. Not all of the historic buildings that we have was on register such as this," said Lange.

The home was put on that list back in 1982. "To see a beautiful home like this go down in flames is very heartbreaking," said Lange.

The roads here are now open and the property will be fenced off.