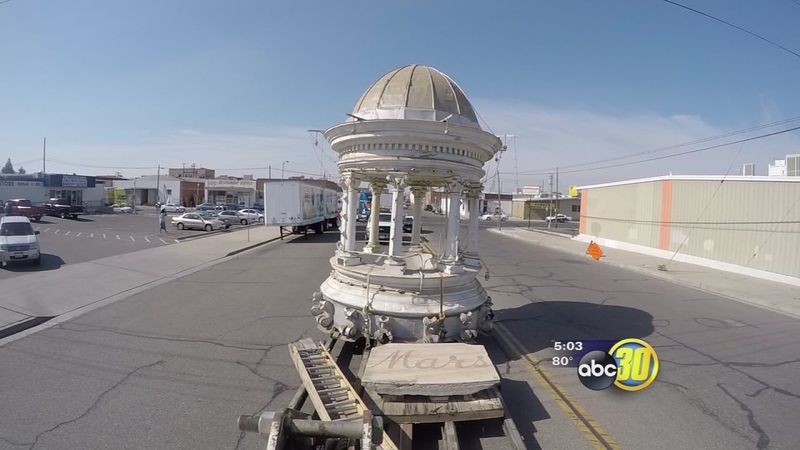 FRESNO, Calif. (KFSN) -- It was moving day for a piece of Fresno's history. The Cupola that once sat on the very top of the old county courthouse was moved from a downtown warehouse to it's new home, at the Fresno County Fairgrounds.

On a historical note, the old courthouse was built in 1875. The cupola was added along with a dome and wings in 1895. It is all that is left of the structure that was torn down in 1964. No good explanation for the demolition was ever made, but the public was outraged, and the county supervisors who supported the demolition were voted out of office.
Related topics:
societyfresno downtownfresno southeasthistoryfresno historical societyfresno
Copyright © 2022 KFSN-TV. All Rights Reserved.
FRESNO
Mayor Dyer plans to add more officers to Fresno Police Department
Armed men rob 2 Fresno grocery stores within an hour, police say
Where to see holiday lights in Fresno and Clovis
Where to see holiday lights in Fresno and Clovis
TOP STORIES
1 killed in head-on crash with suspected DUI driver in west Fresno
Firefighters investigating deadly mobile home fire in Tulare
Man kidnapped, carjacked by armed suspect in Visalia
Some Valley hospitals postpone 'elective' surgeries due to COVID surge
Man pleads not guilty to murdering brother-in-law on Christmas Eve
Foggy Day School Schedules, Fog Tracker from ABC30
Democrats fail to pass voting rights legislation in Senate
Show More
Armed man robs 7-Eleven in east central Fresno
Man who admitted killing dog to Fresno police facing more accusations
Man charged with murder of 2-year-old whose father died a year earlier
UK police arrest 2 men over Texas synagogue hostage-taking
Woman killed in hit-and-run in Atwater, police say
More TOP STORIES News